Kim had examined plans to fire missiles near Guam, but made no move towards an immediate strike, Korean Central News Agency reported. 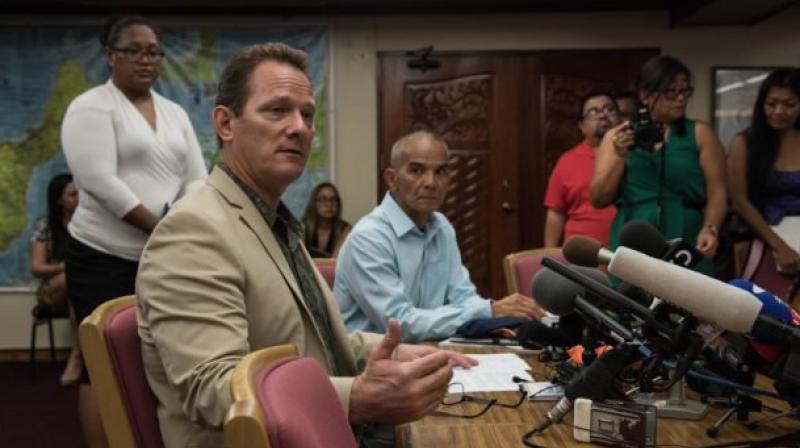 Hagatna: Guam officials were "ecstatic" Tuesday as North Korea appeared to back away from its threat to fire four missiles towards the US territory in the western Pacific.

"There doesn't appear to be any indication, based on what we're hearing, that there will be any missiles attacking in the near future or in the distant future," lieutenant governor Ray Tonorio said.

"It is their Liberation Day North Korea tends to use symbolism as part of their decision making," he said after CNN reported on the US spy satellite pictures. "We are almost ecstatic that Kim Jong Un has backed off," he added.

Pyongyang's official Korean Central News Agency (KCNA) reported that Kim had examined plans to fire missiles near Guam, but made no move towards an immediate strike.

Instead he hinted he would hold off, saying he would "watch a little more the foolish and stupid conduct of the Yankees spending a hard time of every minute of their miserable lot".

Tensions have been mounting since North Korea last month conducted two intercontinental ballistic missile tests, which appeared to bring much of the US within range.

President Donald Trump responded by warning Pyongyang of "fire and fury like the world has never seen". The North replied by setting a mid-August deadline to finalise plans to test-fire its missiles towards Guam, a US territory in the Pacific.

As Guam residents waited anxiously for the deadline, they were woken just after midnight Tuesday by a "civil danger warning" that was accidentally broadcast by a radio station.

A statement from the Guam Homeland Security and Civil Defense office said the "unauthorised test was not connected to any emergency, threat or warning" and it was working to ensure "human error will not occur again".

Tonorio said Kim appeared to have "calmed down" some of his rhetoric. "We're happy that he has taken a look at their plans and will be holding off on, at least it appears, the imminent threats to Guam," he said.

"At this point, our government is operating, our tourism is continuing to grow, there have been no major changes in our forecast." Guam's citizens have been stoic through the crisis, with many saying they fear the looming typhoon season more than aggression from North Korea which has threatened the island several times in recent years.

"It doesn't change the way I feel. At the height of the threats, I was not worried. I have faith in the Lord," 58-year-old accountant Adoracion Manibusan said after Pyongyang took a step back from the brink.

"Besides, there is really nothing we can do if we get attacked. There's no place to hide," she said. Despite the cooler language from North Korea, Tonorio said there was no change to the threat level in Guam, which is home to two large US military installations and more than 6,000 military personnel.