‘Cold War 2’: US could give lethal weapons to Ukraine

Trump is travelling back to White House to sign an executive order at the White House. 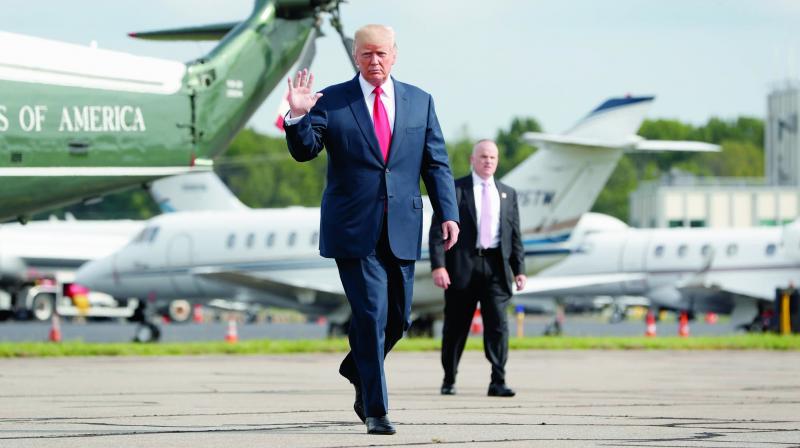 US President Donald Trump waves as he walks from Marine One to board Air Force One at Morristown Municipal Airport, in Morristown, New Jersey. (Photo: AP)

Washington: Seeking leverage with Russia, the Trump administration has reopened consideration of long-rejected plans to give Ukraine lethal weapons even if that would plunge the United States deeper into the former Soviet republic’s conflict.

The proposal, endorsed by the Pentagon and the state department, reflects his administration’s growing frustration with Russian intransigence on Ukraine and a broader deterioration in US-Russian ties.

Awaiting US President Donald Trump and his closest advisers is an authorisation to provide Ukraine with anti-tank and potentially anti-aircraft capabilities, according to US officials familiar with the plan.

It’s not dramatically different from proposals rejected by President Barack Obama, who feared an influx of US weapons could worsen the violence responsible for more than 10,000 deaths in Ukraine since 2014 and create the possibility of American arms killing Russian soldiers. Such a scenario could theoretically put the nuclear-armed nations closer to direct conflict.

While Mr Obama was still in office, Mr Trump’s campaign also rejected the idea of arming Ukraine preventing it from being included in the Republican platform.

Now, however, it’s under discussion by Trump’s senior national security aides, according to the officials who spoke on condition of anonymity.

While there is no deadline for a decision and one is not expected imminently, the debate is going on as US and Russian diplomats prepare to meet as early as this coming week to explore ways to pacify eastern Ukraine, where Russian-backed separatists have fought the central government for three years.

“The Russians have indicated some willingness to begin to talk with us about a way forward on Ukraine,” secretary of state Rex Tillerson said after seeing his Russian counterpart Sergey Lavrov, last week in the Philippines.