The date for a meeting between Trump and Putin has not been set but they could meet at the G-20 summit in July in Germany. 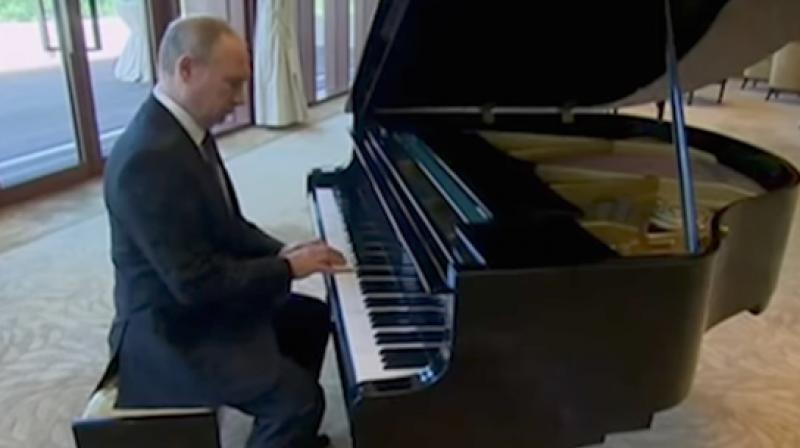 Putin says he has not decided what he would play when he meets US President Donald Trump. (Photo: AP)

Washington: Russian President Vladimir Putin, who whiled away the time playing the piano while waiting on Sunday for the Chinese leader, says he has not decided yet what he would play when he meets US President Donald Trump.

The date for the much-anticipated meeting between Trump and Putin has not been set but it’s likely that they would meet at the G-20 summit in July in Germany.

Asked on Monday by reporters which song he would play when he meets with Trump, Putin said they “need to meet first, talk and then choose the tune to match.”

Putin said the impromptu piano rendition he gave on the sidelines of a meeting in Beijing on Sunday had been hampered by an out-of-tune instrument.

Putin was captured on camera on Sunday sitting down at a grand piano and performing a few slightly hesitant chords of two popular Soviet-era compositions, “Moscow Windows” and “Evening Song.”

Putin said he had just been idly toying around with the keys while he waited for his meeting to start with Chinese leader Xi Jinping.

“It’s a pity that the piano was out of tune,” Putin said. “It was quite hard to play, even for me, someone who plays with two fingers. I cannot say I played, I was just pressing the keys with two or three fingers.

“I thought that if Peskov is filming, it’s probably for personal use, for the archive,” Putin said, referring to his spokesman, Dmitry Peskov. “But they decided to post it. But never mind. I think I didn’t let you down.”

Putin, a 64-year-old former KGB spy has demonstrated his skills on the piano in the past, although he has mostly cultivated a more macho image.

That has included riding a horse in Siberia, piloting a firefighting plane and diving in submersibles into the depths of Lake Baikal and the Black Sea off the Crimean coast.