Pete Buttigieg, the gay, liberal mayor of a small American city in the conservative bastion of Indiana, launched his presidential bid. 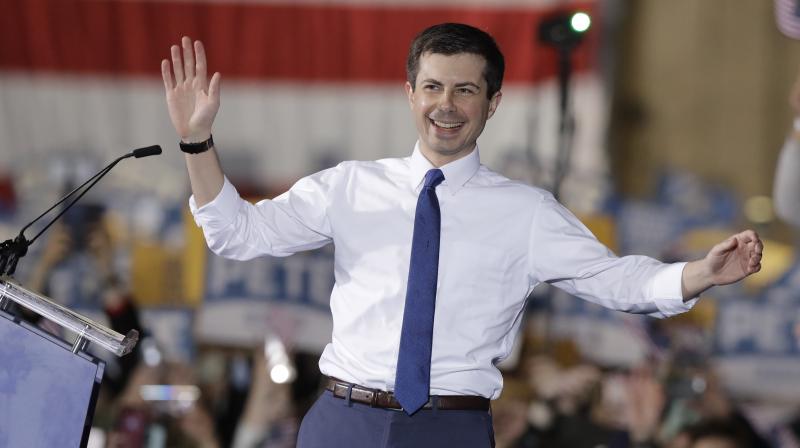 Voters in states such as Michigan and Wisconsin helped hand Republican US President Donald Trump his victory in the 2016 election. (Photo:AP)

South Bend: Pete Buttigieg, the gay, liberal mayor of a small American city in the conservative bastion of Indiana, officially launched his presidential bid Sunday, joining a crowded field of Democrats vying for their party's nomination in 2020.

The 37-year-old Rhodes scholar and Afghanistan war veteran is the two-term mayor of his hometown of South Bend -- a left-leaning bubble in America's so-called "Rust Belt" region, where the decline of industries such as steel and automobile manufacturing has hurt local economies.

Voters in states such as Michigan and Wisconsin helped hand Republican US President Donald Trump his victory in the 2016 election.

Buttigieg, who is credited with helping turn South Bend around, has couched himself as a can-do reformer who can speak to voters across the political spectrum. The message has helped catapult him from relative obscurity to becoming one of the leading Democrats in the crowded presidential race.

"My name is Pete Buttigieg. They call me 'Mayor Pete.' I'm a proud son of South Bend, Indiana, and I am running for president of the United States!" he told a jubilant crowd of supporters at a former assembly plant turned high-tech hub in South Bend.

"That's why I am here, to tell a different story than 'Make America Great Again'" he added, referring to Trump's campaign slogan. "This time it's not just about winning an election. It's about winning an era."

The official launch -- in which Buttigieg touched upon a number of liberal talking points such as racial justice, voting rights and health care reform, as well as his faith and marriage to Chasten Buttigieg -- is expected to give his surprisingly strong campaign an additional boost.

Campaign staffers said they have been caught by surprise by the speed with which the mayor has generated nationwide political support, and are still staffing up the campaign. Buttigieg had no speech writer to help him prepare his remarks.

So many people showed up for the launch event that a large crowd was left outside in the rain to watch on a large video screen. Buttigieg braved the elements and thanked the crowd moments before making his official announcement indoors.

"He represents a new generation of Democratic leadership. We love his vision," said Jenn Watts, 35, while her three-year-old daughter sat on her shoulders.

They were in the cavernous event space in the former plant of defunct automaker Studebaker waiting more than two hours to see Buttigieg speak.

"As a young mom with a young daughter, he represents what I want my daughter to see in leadership in this country," Watts added.

In the three months since he declared an exploratory committee to test a presidential run, Buttigieg has raised $7 million, more than most other candidates, and jumped to third place in the latest polls of voters in Iowa and New Hampshire -- the earliest states to vote in next year's primary elections.

The popular mayor who speaks eight languages and plays classical piano has been the focus of countless news stories and profiles.

The fascination has been in no small part due to his background: he would be the youngest, first openly gay, first millennial and first mayor to become president.

But Buttigieg must still overcome the perception that his youth and thin resume as mayor of a town of just 100,000 leaves him lacking the experience necessary for the presidency.

"I recognize the audacity of doing this as a Midwestern millennial mayor," Buttigieg said. "But the moment we live in compels us to act."

Drew Corbin, a 24-year-old college student clutching four campaign T-shirts he had purchased for friends and wearing a campaign cap, said he still had not fully committed to the candidate.

"There's a lot of candidates. I don't want to make up my mind so soon, almost a year before the primaries," Corbin said. "But he's definitely my favorite right now."

Buttigieg's launch at Studebaker called to mind the plant's closure in 1963 that was still reverberating in the city in 2011 when he was elected mayor.

He set out to tear down decaying, abandoned homes and restore the blighted Studebaker complex to make it suitable for new high-tech companies.

In an unlikely feat, the city has reversed decades of population decline and attracted new businesses and development, with the mayor's popularity growing in the process.

"His appeal, for many people in South Bend, is his ability to look forward and to focus on better days ahead," South Bend-based political science professor Elizabeth Bennion of Indiana University told AFP.

"Once people looked at his resume and heard him speak, many started talking about the fact that he was destined for national politics."