World   Americas  14 Nov 2016  It’s complicated: A lesson from the US polls
World, Americas

It’s complicated: A lesson from the US polls

Trump may mean trouble for Mexico but as a life lesson, he is a case study. 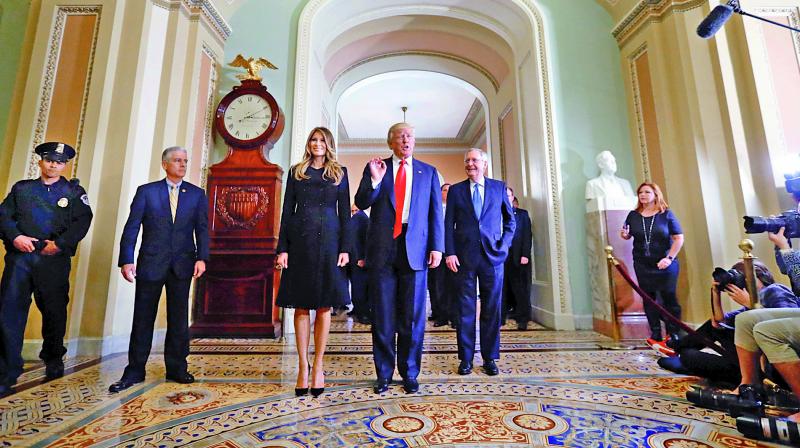 Donald Trump’s campaign was described as a mockery.

Five years ago, at the prestigious White House Correspondents’ Dinner, US President Barack Obama unleashed a barrage of jokes at Donald Trump. You can find a video of Mr Obama’s speech online and it’s over 10 minutes long — full of searing taunts and pokes that could’ve roasted even the most resilient of individuals. Mr Trump, seated amidst some of Washington’s most influential, remained quiet, wearing a TV-friendly smile and sometimes, even waving.

“No one is happier to put this birth certificate issue (the Birther movement which said Obama was not born in the USA) to rest, and that’s because he (Trump) can finally get back to focusing on the issues that matter, like did we fake the moon landing? What really happened in Roswell? And where are Biggie and Tupac?,” Mr Obama said. Bellowed laughter filled the room.

Trump insiders say that was the day the tycoon decided to run for President. He was chalking out plans to land Mr Obama’s job even as he was being roasted by the world’s most powerful politician.

Self-belief, a fighting spirit and a thick skin are pretty much all you need to succeed in life. Donald Trump’s campaign was described as a mockery. America’s gurus were confident he would never make it and some within his own party were pleading with him to hit stop on the humiliation. But he powered through. The man may mean trouble for Mexico and most of the Free World but as a life lesson, he is certainly a case study. He fought on and today, he’s at the White House as President-Elect.

And then, there’s Hillary Clinton. The former First Lady was a senator, went on to become Secretary of State and in the Land of the Free, became the first woman to come THIS close to a Presidency. In that stirring concession speech, Mrs Clinton said: “To the young people in particular, I hope you will hear this. I have spent my entire adult life fighting for what I believe in. I’ve had successes and I’ve had setbacks. Sometimes really painful ones. Many of you are at the beginning of your professional public and political careers. You will have successes and setbacks, too. This loss hurts, but please never stop believing that fighting for what’s right is worth it.” She’s not kidding when she says she’s had setbacks (hear that, Bill?)

The American election of 2016 may have brought us closer to nuclear war but, it is perhaps the finest examples of what a fighting spirit can achieve. This year, two individuals who had so much to lose, managed something that’s considered almost impossible — turning humiliation into mental fuel. And just for that, we applaud you America.