Mr Stoltenberg said Nato and its member countries need to find ways to talk with Russia. 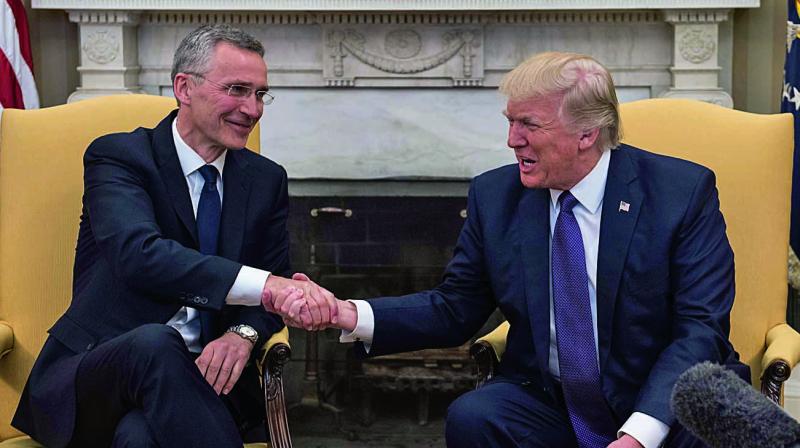 Washington: America’s relationship with Russia “may be at an all-time low”, US President Donald Trump has said, but he hoped that it would have been wonderful if the two countries could get along.

“It would be wonderful as we were discussing just a little while ago, if Nato and our country could get along with Russia. Right now we’re not getting along with Russia at all. We may be at an all-time low in terms of relationship with Russia,” Mr Trump told reporters at a joint White House news conference with Nato secretary general Jens Stoltenberg.

Later, Mr Trump tweeted that he hoped US-Russian relations will “work out fine”. “Things will work out fine between the U.S.A. and Russia,” he said in his tweet. “At the right time everyone will come to their senses & there will be lasting peace!”

US secretary of state Rex Tillerson has just concluded his maiden visit to Russia during which he met Russian President Vladimir Putin. “I’ll be speaking in with Rex Tillerson. I think he had a very successful meeting in Russia. We’ll see. We’ll see the end result, which will be in a long period of time perhaps. But the end result is what’s most important, not just talk,” Mr Trump said.

“And I think that based on everything I’m hearing, things went pretty well, maybe better than anticipated,” he said.

Mr Trump hoped that the European countries would have nothing to fear from Russia. “I want to just start by saying hopefully they’re going to have to fear nothing ultimately.”

Mr Stoltenberg said Nato and its member countries need to find ways to talk with Russia.

“We believe that the precondition for a political dialogue with Russia is that we are strong and that we are united,” he said.