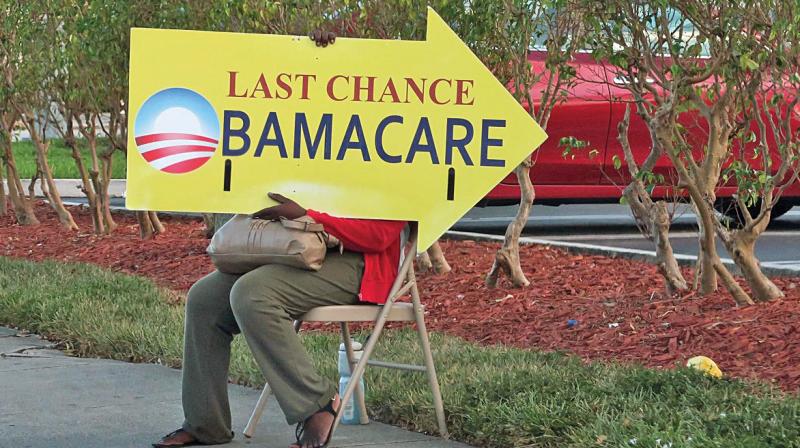 A file photo of a woman holding an Obamacare sign in front of a medical centre in Miami. (Photo: AFP)

The vote was 51-48. The resolution now goes to the House of Representatives, which is expected to vote on it this week. Scrapping Obamacare is a top priority for the Republican majorities in both chambers and Republican President-elect Donald Trump.

Republicans have said that the process of repealing Obamacare could take months, and developing a replacement plan could take longer. But they are under pressure from Mr Trump to act fast; he said on Wednesday that the repeal and replacement should happen “essentially simultaneously.”

Some 20 million previously uninsured Americans gained health coverage through the Affordable Care Act, as Obamacare is officially called. Coverage was extended by expanding Medicaid and through online exchanges where consumers can receive income-based subsidies.

Republicans have launched repeated legal and legislative efforts to unravel the law, criticizing it as government overreach. They say they want to replace it by giving states, not the federal government, more control.

But in recent days some Republicans have expressed concern about the party’s current strategy of voting for a repeal without having a consensus replacement plan ready. House Speaker Paul Ryan said this week he wants to pack as many replacement provisions as possible into the legislation repealing Obamacare. But Senate Finance Committee Chairman Orrin Hatch, also a Republican, said this could be difficult under Senate rules.

The resolution approved Thursday instructs committees of the House and Senate to draft repeal legislation by a target date of January 27. Both chambers will then need to approve the resulting legislation before any repeal goes into effect.

Senate Republicans are using special budget procedures that allow them to repeal Obamacare by a simple majority; this way they don’t need Democratic votes. Republicans have a majority of 52 votes in the 100-seat Senate; one Republican, Senator Rand Paul, voted no on Thursday.

Democrats mocked the Republican effort, saying they don’t  have an alternative. “They want to kill ACA but they have no idea how they are going to bring a substitute proposal,” said senator Bernie Sanders.