Commenting on Vice President Mike Pence, Trump said he has been fantastic at his work 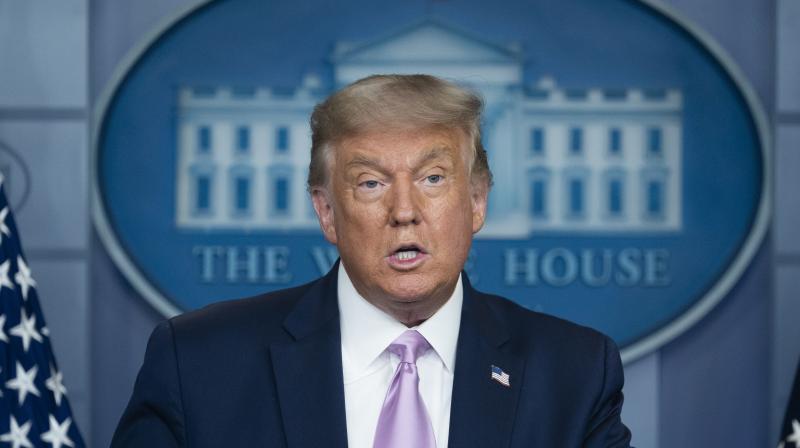 US President Donald Trump speaks at a news conference in the James Brady Press Briefing Room at the White House. (AP)

Washington: US President Donald Trump said he is surprised that his Democratic Party challenger for the presidential elections Joe Biden has named Indian-origin Senator Kamala Harris as his running mate despite knowing how "nasty" and "disrespectful" she has been towards him.

Biden on Tuesday named Harris as his vice-presidential running mate, making history by selecting the first black woman to compete on a major party's presidential ticket.

Harris, 55, whose father is an African from Jamaica and mother an Indian, is currently the US Senator from California.

"We'll see how she works out. She did very, very poorly in the primaries as you know. She was expected to do well. She ended up at right around two per cent," Trump told reporters at a White House news conference.

Harris had launched her presidential campaign in January 2019. Her campaign could not take off and by the end of the year, she withdrew from the race.

Harris is the first person of colour to be selected as a vice presidential candidate and also only the fourth woman and first-ever African American and Indian American to be running for the second highest political position in the country.

Responding to questions, Trump told reporters that Harris has been nasty to Biden.

"As far as Kamala is concerned, she's a big tax raiser. She's a big slasher of funds for our military. And she's got a lot of difficult things that she's going to have to explain. Plus she was very, very nasty -- one of the reasons it surprised me -- she was probably nastier than even Pocahontas (Senator Elizabeth Warren) to Joe Biden. She was very disrespectful to Joe Biden," Trump said, referring to the Democratic Party debates.

"It's hard to pick somebody that's disrespectful. When she said (those) things during the debates -- the Democrat Primary debates -- that were horrible about sleepy Joe. I would think that he wouldn't have picked (her)," Trump said.

Commenting on Vice President Mike Pence, Trump said he has been fantastic at his work.

"I will take him over Kamala and the horrible way she, again, treated Justice Brett Kavanaugh. That was a horrible event. I thought it was terrible of her, I thought it was terrible for our nation. I thought she was the meanest, the most horrible, most disrespectful of anybody in the US Senate, Trump said. Harris had questioned Kavanaugh's sexual misconduct allegations during the justice's 2018 confirmation hearings for the Supreme Court.

Vice President Pence said he was not surprised by Biden's selection.

"As you all know, Biden and the Democratic Party have been overtaken by the radical left. So given their promises of higher taxes, open borders, socialised medicine, and abortion on demand, it's no surprise that he chose Senator Harris, Pence said at a speech in Arizona.

The vice-presidential debate between him and Harris is on October 7.

Meanwhile, NBC News reported that President Trump had donated USD 6,000 to Harris' campaign for the office of California Attorney General. Trump, a private citizen at the time, had donated USD 5,000 to the Harris campaign in 2011 and USD 1,000 in 2013.