'To preserve our constitution, our democracy, our basic integrity, he should be impeached,' Biden said. 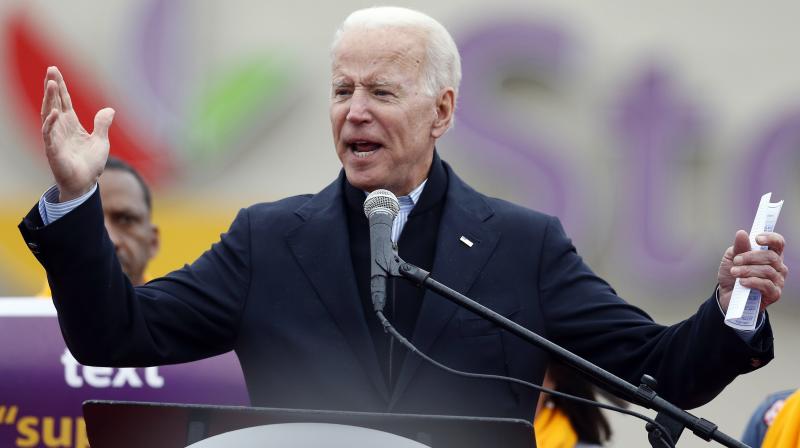 “He’s shooting holes in the constitution, and we cannot let him get away with it,” added Biden. (Photo: File)

Washington: Democratic White House hopeful Joe Biden called Wednesday for Donald Trump’s impeachment, saying the president “betrayed” the United States, but Trump dug in, predicting that the Supreme Court would have to resolve the fight.

“To preserve our constitution, our democracy, our basic integrity, he should be impeached,” Biden told supporters at a rally in New Hampshire, adding his voice to that of other Democratic contenders.

“He’s shooting holes in the constitution, and we cannot let him get away with it,” added Biden.

Meanwhile a poll by Fox News, a TV channel generally viewed as sympathetic to the president, showed that “a new high” of 51 per cent of voters want Trump impeached and removed from office.

Trump, however, gave no sign of buckling under pressure from the Democratic party probe into his alleged bid to damage Biden by strong-arming Ukraine to investigate the former vice president.

Having threatened a constitutional crisis by refusing to cooperate with the congressional investigation, Trump predicted that the row would end up “being a big Supreme Court case.”

He told reporters in the White House that his Republican party was being “treated very badly.”

“No one is above the law, not even President Trump,” the Democratic majority leader in the House, Steny Hoyer, said Wednesday.

On Twitter, which Trump is using to bombard the public with conspiracy theories about a “deep state” aiming to eject him, the president argued that the whistleblower behind the impeachment case had been shown to be partisan and inaccurate.

“The Whistleblower’s facts have been so incorrect about my ‘no pressure’ conversation with the Ukrainian President, and now the conflict of interest and involvement with a Democrat Candidate, that he or she should be exposed and questioned,” Trump tweeted.

In another tweet, Trump dismissed the impeachment process as a Democratic bid to influence the election, saying “their total focus is 2020, nothing more.”

But Trump, who broke with precedent by campaigning for reelection almost from the moment he took office in 2017, is himself pouncing on the impeachment as the new cornerstone of his 2020 effort.

He and the Republican Party have pushed hard to raise funds off the back of their accusation of unfair treatment from the Democratic lower house in Congress.

And on Thursday and Friday, Trump will take that message to his core supporters when he holds campaign rallies in Minneapolis and in Louisiana.

Even if the House impeaches Trump, it remains unlikely that the Republican-led Senate would convict him in the subsequent trial.

However, Trump’s already turbulent presidency would be forever associated with the impeachment.

In the call, Trump asked Zelensky to look into what the US leader said were corrupt business deals involving Biden.

Democrats say that Trump tried to coerce Zelensky by holding back US military aid to Ukraine. Trump says there was no quid pro quo and that his only desire is to combat corruption.

He subsequently said publicly he would also like China to investigate Biden, something critics say bolsters the allegation that Trump is seeking foreign help to discredit opponents.

On Tuesday, the Trump administration blocked a potentially major witness, ambassador to the European Union Gordon Sondland, from testifying before Congress. Democrats then slapped Sondland with a subpoena to appear on October 16.

Later the same day, the White House announced in a lengthy legal statement that it rejected any cooperation with the Democrats at all.

Lawmakers want to hear on Friday from another key witness: former US ambassador to Kiev Marie Yovanovitch, who is scheduled to appear before the House Intelligence Committee.

US media has reported that Trump removed her from her post because she opposed his efforts to get Ukraine to investigate Biden.