Woodward is reported to have done 18 interviews with Trump for the book, due to be published September 15 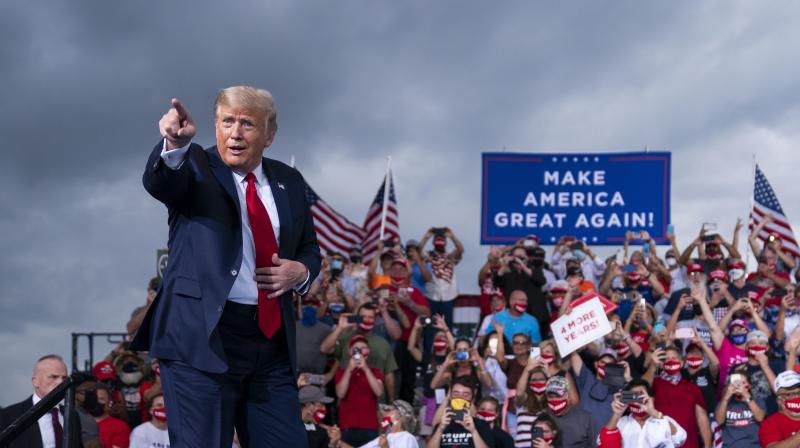 Washington: The latest book penned by veteran US journalist Bob Woodward, ‘Rage’, has raised some grave accusations against the US president Donald Trump, including that he deliberately played down the coronavirus pandemic despite knowing it’s seriousness.

Woodward is reported to have done 18 interviews with Trump for the book, due to be published September 15. The revelations come as the US stands as the worst-hit in this pandemic with 6.38 million cases and 190,872 deaths so far.

Playing down the pandemic

President Donald Trump admitted he tried to minimize the seriousness of the threat from Covid-19 at the outset of the pandemic in the audio recordings released Wednesday from interviews.

"I wanted to always play it down," Trump said about the pandemic in an interview with Woodward on March 19, according to a CNN preview of the book.

"I still like playing it down, because I don't want to create a panic," he said in the conversation with Woodward, which was recorded.

In another recorded interview, on February 7, he told Woodward the virus "goes through the air" -- despite repeatedly mocking people who wear masks in the weeks and months after. It took until July before he was seen publicly wearing a mask.

Trump, in his reaction, did not claim he wasn’t downplaying the pandemic threat. Speaking to reporters at the White House, he denounced the book as "another political hit job" and said if he'd downplayed COVID-19 it was to prevent a "frenzy."

"I don't want people to be frightened," he said.

"I'm not going to drive this country or the world into a frenzy," he said. "We have to show leadership and the last thing you want to do is create a panic."

He slammed Woodward for doing "hit jobs with everybody" and said he "probably, almost definitely won't read it because I don't have time to read it."

‘Kim tells me everything’

Woodward wrote that Trump said he was impressed with Kim when he first met the North Korean leader in Singapore in 2018 and that Kim was “far beyond smart.” Trump also said that Kim “tells me everything” and even gave the president a graphic account of how Kim had his own uncle killed.

As he engaged in nuclear arms talks with Kim, Trump dismissed intelligence officials' assessments that North Korea would never give up its nuclear weapons. Trump told Woodward that the CIA has “no idea” how to handle Pyongyang.

Trump also dismissed criticism about his three meetings with Kim, claiming the summits were no big deal. Critics said that by meeting Kim, Trump provided the North Korean leader with legitimacy on the world stage.

“It takes me two days. I met. I gave up nothing,” said the president, who likened North Korea's attachment to its nuclear arsenal to somebody who is in love with a house and “they just can't sell it.”

The “law and order” president

In June, after federal agents forcibly removed protesters from Washington's Lafayette Square to make way for Trump to stage a photo opportunity outside a church near the White House where he held up a bible, Trump called Woodward to boast about how he was for “law and order.”

“We're going to get ready to send in the military slash National Guard to some of these poor bastards that don't know what they're doing, these poor radical lefts,” Trump told Woodward, who recorded Trump.

Later that month, Woodward asked the president if, as a white man, he had a responsibility to better “understand the anger and pain” felt by Black Americans.

“No,” Trump replied. “I don't feel that at all.” As Woodward pressed Trump about discrimination and inequalities suffered by Black people over the years, the president pointed to how the unemployment rate for Black Americans fell before the pandemic.

When the two spoke again about race relations on June 22, Woodward asked Trump whether he thought there was systemic racism in America.

“Well, I think there is everywhere,” Trump said. “I think probably less here than most places. Or less here than many places.” Asked by Woodward whether racism “is here” in the United States in a way that affects people's lives, Trump replied: “I think it is. And it's unfortunate. But I think it is.”

Woodward writes that sources, who spoke to him on condition of anonymity, confirmed that the US military had a “secret new weapons system." But the sources did not provide details and told Woodward, according to the book, that they were surprised Trump had disclosed it.

Trump national security adviser Robert O'Brien told Fox News' “Special Report” on Wednesday that the president did not talk about any specific weapon system. “We're always on the cutting edge and we've always got something out there that our adversaries don't know about," O'Brien said.