Twitter has deleted a video by Trump for his 2020 election bid, that used unauthorised music from blockbuster The Dark Knight Rises. 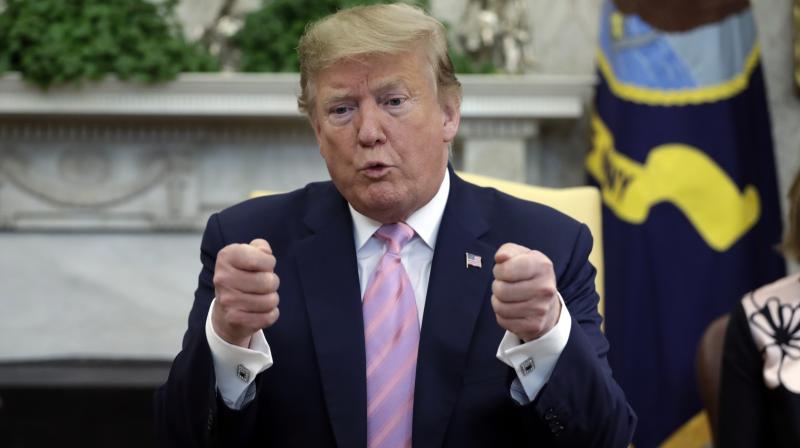 The video in Trump's tweet, captioned as "Make America Great Again", has now been replaced by a message. (Photo:AP)

Los Angeles: Twitter has deleted a video by US President Donald Trump for his 2020 election bid, that used unauthorised music from Warner Bros' blockbuster "The Dark Knight Rises", after the studio complained to the social media platform.

The microblogging site complied with Warner Bros' demand to protect its copyright late Tuesday, hours after the US President tweeted a provocative campaign video, set to a track from the score of Christopher Nolan's final movie in his massively successful Batman trilogy.

"The use of Warner Bros' score from 'The Dark Knight Rises' in the campaign video was unauthorised. We are working through the appropriate legal channels to have it removed," Warner Bros told Deadline in a statement.

The video in Trump's tweet, captioned as "Make America Great Again", has now been replaced by a message that it was no longer available "in response to a report by the copyright owner".

Scored by Hans Zimmer, the now removed video was set to the Oscar-winning music composer's tune "Why Do We Fall?" from the 2012 film's soundtrack. The roughly two-minute video juxtaposes brief shots of prominent Democrats — from Barack Obama and Hillary Clinton to comedians Rosie O'Donnell and Amy Schumer — against images of Trump from his first two years in office, including his meetings with North Korean dictator Kim Jong Un and Brazil's far-right president Jair Bolsonaro.

It also shared a Fox News headline saying "Mueller report shows no proof Trump team conspired with Russia", along with text that read "First they ignore you, then they laugh at you, then they call you racist."