Trump, a Republican, sought in his budget proposal last year to slash foreign aid but faced steep resistance from Congress 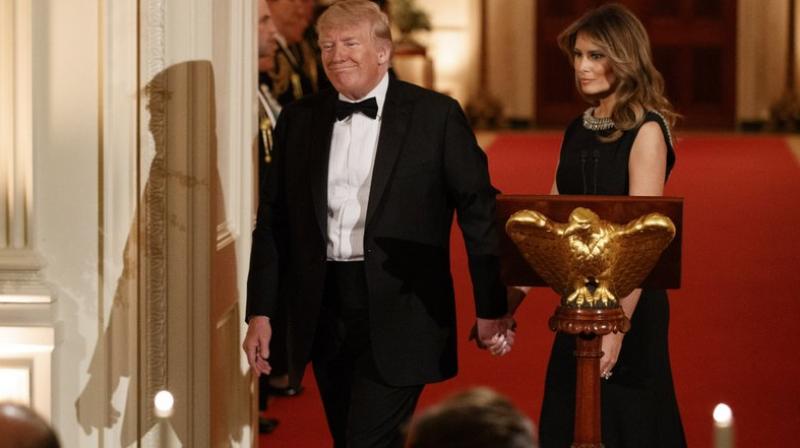 President Donald Trump holds hands with first lady Melania Trump as they take their seats after he spoke at the Governors' Ball on Sunday in the East Room of the White House in Washington. AP photo

US President Donald Trump will propose on Monday a 21% cut in foreign aid and slashes to social safety-net programs in his $4.8 trillion budget proposal for fiscal 2021, according to senior administration officials.

The budget would spend money to fund infrastructure projects and defense, but would also raise funds by targeting $2 trillion in savings from mandatory spending programs in the United States. It assumes revenues around $3.7 trillion.

Trump, a Republican, sought in his budget proposal last year to slash foreign aid but faced steep resistance from Congress and did not prevail.

The president’s latest blueprint for administration spending proposals is unlikely to be passed by the Democratic-controlled House of Representatives, particularly in an election year.

Trump, who campaigned for the presidency in 2016 on a promise to build a wall along the U.S. border with Mexico, will seek $2 billion in funding for further construction on that project, substantially less than the $8.6 billion he requested a year ago.

During the 2016 campaign, Trump said Mexico would pay for the wall, which it has refused to do.

The budget seeks money to fund a U.S. infrastructure overhaul that both Democrats and Republicans have said is a priority. The two sides are unlikely to agree on any major legislation this year, though, as they fight for control of the White House and Congress in the November elections.

The budget would raise military spending by 0.3% to $740.5 billion for fiscal-year 2021, starting on Oct. 1 and propose higher outlays for defense and veterans, administration officials confirmed.

But former Chairman of the Joint Chiefs of Staff Mike Mullen raised concerns about how the foreign aid cuts would affect the U.S. civilian footprint around the world that helps reduce the need for military intervention.

“In an era of great power competition, cutting these critical investments would be out of touch with the reality around the world,” he wrote in a letter to top congressional leaders. “This is a moment when more investment in diplomacy and development is needed not less.”

The White House proposes to slash spending by $4.4 trillion over 10 years.

In the fiscal-year 2021 budget, that would include $130 billion from changes to prescription-drug pricing for the Medicare program for older Americans, $292 billion from cuts in safety-net programs - such as work requirements for the Medicaid program for the poor, and food stamps - and $70 billion from clamping down on eligibility rules for federal disability benefits. Those changes are likely to spur Democrats’ ire.

Deficits would remain high but eventually come down.

The U.S. government ended fiscal 2019 with the largest budget deficit in seven years as gains in tax receipts were offset by higher spending and growing debt-service payments, the Treasury department said on Friday.

The budget forecasts $4.6 trillion in deficit reduction over 10 years and assumes economic growth will continue at an annual rate of roughly 3 percent for years to come, officials said. Trump has taken credit for the strength of the U.S. economy, thanks in part to tax cuts he championed and Congress passed earlier in his term. The budget funds an extension of those cuts over a 10-year period with $1.4 trillion.

Aid to Ukraine would remain at its 2020 levels under the new foreign aid proposal. Trump was acquitted last week of impeachment charges that he withheld aid to Ukraine to spur Kiev to investigate political rival Joe Biden, a Democratic presidential candidate and former U.S. vice president.

Administration officials told Reuters that Trump would request an increase in funding for the U.S. International Development Finance Corporation (DFC) to $700 million from $150 million the previous year, an effort to counter developing economic threats from China and Russia.

The budget also proposes $1.1 billion for cybersecurity efforts by the U.S. Department of Homeland Security.