Worshippers laid out their prayer mats at a park in front of the president’s residence. 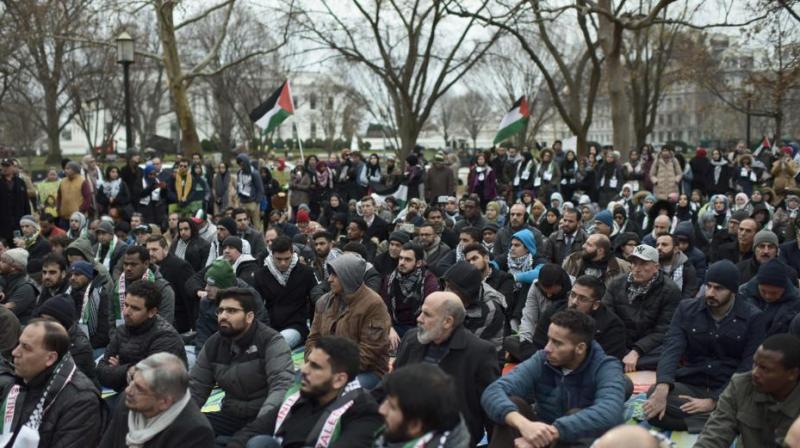 Washington: Hundreds of Muslims attended Friday prayers in front of the White House to protest President Donald Trump’s decision to recognize Jerusalem as the capital of Israel.

Responding to the call of American Muslim organizations, worshippers laid out their prayer mats at a park in front of the president’s residence.

On Wednesday, Trump declared that the US recognizes Jerusalem as the capital of Israel and announced the relocation of the US embassy from Tel Aviv to Jerusalem -- turning his back on decades of American and international diplomacy.

“Trump does not own a piece of soil of Jerusalem and Palestine. He owns the Trump Tower. He can give it away to the Israelis,” Nihad Awad, executive director of the Council on American-Islamic Relations (CAIR), said.

The president is “empowering Christian religious extremism in the US,” he added.

Speaking alongside other prominent figures from the American Muslim community during the protest, Awad called upon Trump to “put the American interests first, not those of a foreign power and its lobbies in the US.”

Another protester, Zaid al-Harasheh, said that Trump’s decision is “not for peace” and will “create more chaos.”

On Friday, clashes between thousands of Palestinians and Israeli security forces in the West Bank and on the Gaza Strip left two people dead and dozens more injured.

Israel seized control of Palestinian East Jerusalem from Jordan in 1967 and later annexed it, a move not recognized by the international community.

The Jewish state considers Jerusalem its undivided capital, but Palestinians believe East Jerusalem is illegally occupied and see it as the capital of their future state.