Narendra Modi and Donald Trump also exchanged views on Myanmar and ways to address the plight of the Rohingya refugees. 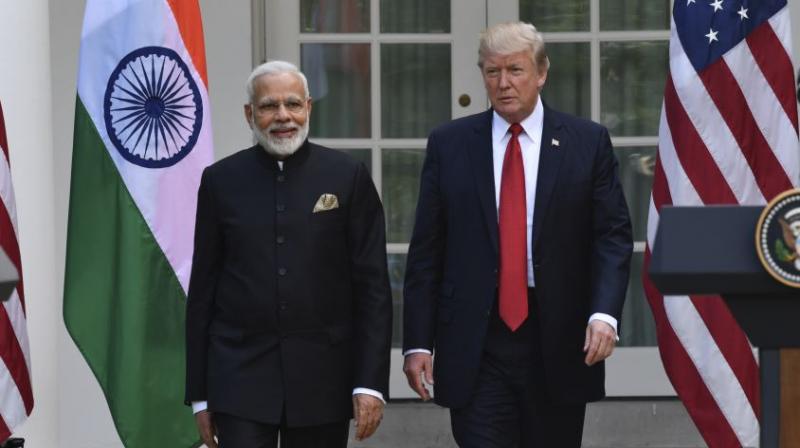 According to the White House, during the call, Donald Trump and Narendra Modi discussed further steps to ensure denuclearisation of North Korea. (Photo: AFP)

Washington: US President Donald Trump and Prime Minister Narendra Modi have expressed concern about the political situation in Maldives over a phone call, as they also discussed the situation in Afghanisthan and enhancing security in Indo-Pacific region, the White House said.

"Both leaders expressed concern about the political crisis in Maldives and the importance of respect for democratic institutions and rule of law," the White House said in a readout of the phone call between Trump and Modi, the first in 2018.

Maldives plunged into a political chaos on last Thursday when the apex court ordered the release of nine imprisoned opposition politicians, maintaining that their trials were "politically motivated and flawed".

The Yameen government has refused to implement the ruling, prompting a wave of protests in Maldives capital, Male.

The White House said the two leaders also pledged to continue working together to enhance security and prosperity in the Indo-Pacific region.

Modi and Trump also exchanged views on Myanmar and ways to address the plight of the Rohingya refugees.

As of now there are some 680,000 Rohingya refugees in Bangladesh putting enormous pressure in the economy of Bangladesh.

Recently Myanmar and Bangladesh agreed on a roadmap of return of these refugees to their homes in Myanmar.

The US believes that this is not the right time for the return of Rohingya refugees.

According to the White House, during the call, Trump and Modi discussed further steps to ensure denuclearisation of North Korea.

"Finally, the leaders agreed to strengthen security and economic cooperation as they look forward to the '2+2' ministerial dialogue between their defence and diplomatic officials in April," the White House said.

The '2+2 dialogue' was announced after the White House meeting between Modi and Trump in June 2017.