White House spokesman Hogan Gidley said, 'We welcome the challenge, whether it be Oprah Winfrey or anybody else.' 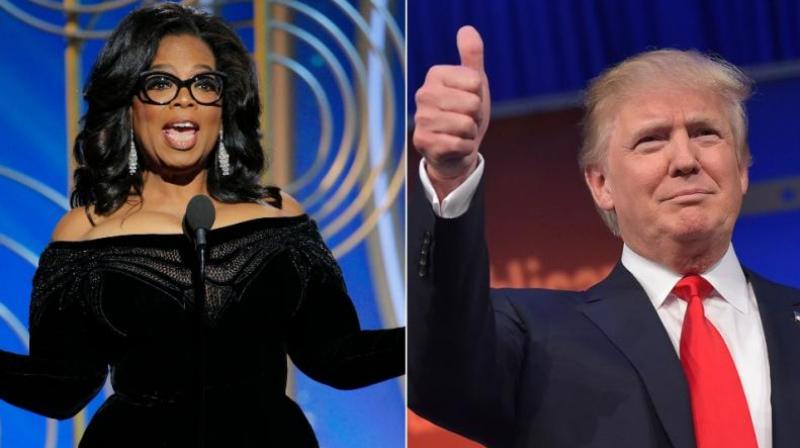 Washington: US President Donald Trump would gladly face Oprah Winfrey as an opponent in the 2020 presidential race, a White House spokesman said on Monday after social media buzz from her speech at an awards show thrust her name into the political arena.

“We welcome the challenge, whether it be Oprah Winfrey or anybody else,” Hogan Gidley told reporters on Air Force One during a flight to Nashville on Monday. “We welcome all comers.”

Winfrey, 63, stole the show at the Golden Globe awards on Sunday night with her speech upon receiving the Cecil B DeMille award for achievement and lit up Twitter with a surge of tweets carrying "#Oprahforpresident" and "#Oprah2020".

She is actively thinking about a run, CNN reported on Monday, citing two of her close friends. CNN did not name the friends, who it said had spoken on condition of anonymity. At least one emphasised that Winfrey had made no firm decision. Winfrey has said in the past she is not interested in running for president, but the Los Angeles Times quoted Stedman Graham, Winfrey’s longtime partner in business and life, as saying on Sunday that, “It’s up to the people ... She would absolutely do it.”

Wearing a black gown to show support for victims, she used her platform to promote the “Time’s Up” movement against sexual harassment and assault, throwing her support behind others who have exposed sexual misconduct in Hollywood and elsewhere in politics and the media.

“She had that room in her hands. It was like a campaign rally,” said Sherry Bebitch Jeffe, a senior fellow at the University of Southern California’s Price School of Public Policy.

After Trump won the White House in 2016 with help from his fame as a reality TV star, it no longer seems far-fetched to consider a similar campaign by Winfrey, an actress, movie and television producer, and chief executive of her OWN cable channel, political analysts said.

Winfrey, long associated with Democratic politics and fundraising, would likely face a crowded field in the Democratic primaries in the 2020 race.

But given her connections, Winfrey might have a fund-raising advantage over her rivals in liberal Hollywood, which is often called an automatic teller machine for Democratic candidates.

“She’s certainly a bigger celebrity than Trump ever was, especially in terms of connecting with her audience. Obviously this has given her an opportunity. What does she do next with it?” said Alan Schroeder, a journalism professor at Northeastern University in Boston who has written on the intersection of show business and politics.

Trump benefited from his star power to win more free media exposure than his rivals in the Republican primary and was able to run a relatively inexpensive campaign.

His committee spent USD 343 million in the primary and general election campaigns with the help of USD 47.5 million of the real estate developer’s own money, which he lent to the campaign and later forgave.

Hillary Clinton, his Democratic opponent, spent USD 585 million including USD 1.5 million of her own money.

Winfrey could supplement any campaign with her own wealth. Forbes estimates she is worth USD 3.0 billion compared to USD 3.5 billion for Trump. She was raised in poverty by a single mother and went on to host the top-rated talk show “The Oprah Winfrey Show” for 25 years before ending it in 2011.

Jeffe, the USC professor, cautioned against thinking of Hollywood as a monolith of liberal Democrats. Besides the liberal creative talent, Hollywood money also comes from the more conservative, unionized trade and craft workforce as well as from the business interests.

“She has credibility with all of them,” Jeffe said.