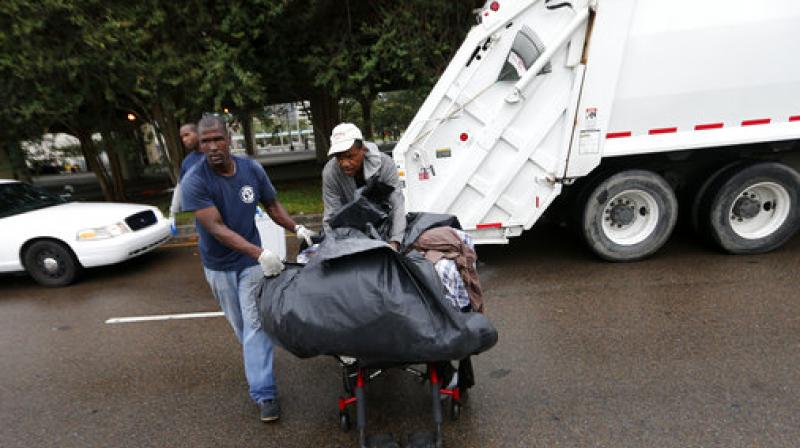 New Orleans:  Hurricane Nate slammed into the southeastern tip of the US state of Louisiana on Saturday and headed toward Mississippi after leaving dozens dead and causing widespread flooding in Central America.

Officials urged residents to evacuate some vulnerable areas before the storm made landfall on Saturday evening, and residents scrambled to make last-minute preparations ahead of the third hurricane to hit the southern US in less than two months.

But US President Donald Trump said federal officials were ready for the fast-moving storm, urging residents of the states of Louisiana, Mississippi, Alabama and Florida on Twitter to "listen to your local authorities & be safe!"

"The center of Hurricane Nate is now making landfall at the mouth of the Mississippi River," the US National Hurricane Center (NHC) said at 7:00 pm Saturday (0000 GMT Sunday).

If it moves as forecast, the worst of the storm will bypass New Orleans, which was ravaged by deadly Hurricane Katrina in 2005.

The storm, a Category One hurricane on the five-level Saffir-Simpson scale, with winds swirling at up to 85 miles (140 kilometers) per hour, had slowed slightly from its earlier pace, heading north at about 20 miles per hour, the NHC said.

The forecast warned that "the combination of a dangerous storm surge and the tide will cause normally dry areas near the coast to be flooded by rising waters moving inland from the shoreline."

Alabama Governor Kay Ivey tweeted that she had asked Trump for a presidential declaration of emergency, "to ensure we have all possible resources in place to respond to #HurricaneNate."

New Orleans issued a mandatory curfew for Saturday from 6:00 pm, and mandatory and voluntary evacuation orders were issued for certain low-lying areas.

Multiple shelters were opened for evacuees, and officials urged residents to finish preparations before evening, including stocking up on several days' supply of food and water.

Stocking up on supplies

"I lived through Katrina and I know what that was like," said Jackie Daigre, 69, who was buying groceries at a busy Walmart store, where the shelves of bottled water were picked almost completely bare.

Officials said the recent hurricanes, devastating as they were, actually helped with preparations for Nate, since emergency supplies and assets deployed for the earlier storms were still in place. Still, the resources of the US Federal Emergency Management Agency (FEMA) have been stretched.

National Guardsmen were prepared to ride out the storm in the city's huge Superdome arena, ready to respond once Nate passes over, the nola.com news website reported.

The city's levee system has been considerably fortified since Katrina claimed some 1,800 lives in the region, but authorities warn that it has not completely eliminated flood risks.

Unlike Hurricane Harvey, which dumped record amounts of rain as it hovered over neighboring Texas for a week, fast-moving Nate was expected to pass through quickly along a northerly path.

"Anyone in low-lying areas... we are urging them to prepare now," he said.

In neighboring Mississippi, lines formed at gas stations in areas along the potential path of the storm. Off the coast, some oil and gas rigs in the Gulf of Mexico have been evacuated.

With widespread electrical outages expected, New Orleans-area power provider Entergy prepositioned repair crews to go to work once the hurricane passed, and warned that outages could last up to a week.

The United States is recovering from two major hurricanes: Harvey, which tore through Texas and then Louisiana in August, and Irma, which slammed Florida in September.

Another powerful storm, Hurricane Maria, ripped through the Caribbean in late September, devastating several islands, including Dominica and Puerto Rico, a US territory.

When Nate struck Central America on Thursday and Friday, at least 31 people were killed and others were still missing.