The US military said that B-52 bombers will be part of additional forces being sent to the Middle East to counter threats from Iran. 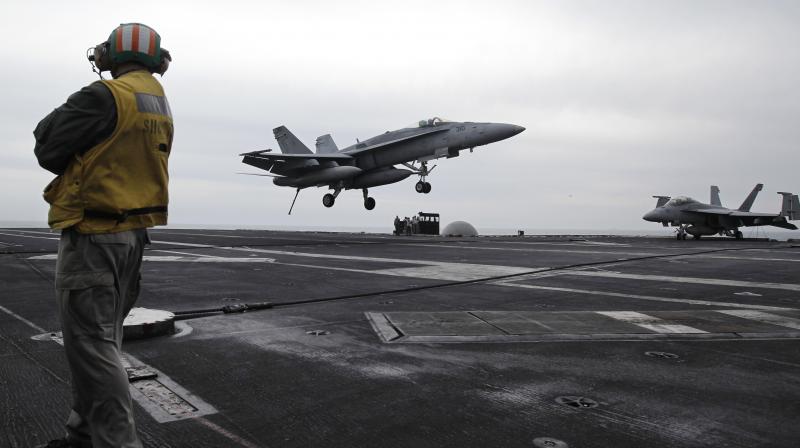 White House national security adviser John Bolton said on Sunday that the United States was deploying a carrier strike group and a bomber task force to the Middle East. (Photo:AP)

Washington: The US military said on Tuesday that B-52 bombers will be part of additional forces being sent to the Middle East to counter what the Trump administration says are "clear indications" of threats from Iran to US forces there.

White House national security adviser John Bolton said on Sunday that the United States was deploying a carrier strike group and a bomber task force to the Middle East.

Captain Bill Urban, a spokesman for US Central Command, said that the bomber task force would consist of B-52 bombers.

US officials, speaking on the condition of anonymity, said four B-52s would be deployed, though that number could change. The United States has regularly maintained a bomber presence in the region, and B-1 bombers were there as recently as last month. The B-52 is a long-range, nuclear capable bomber.

The military also confirmed that the Abraham Lincoln carrier strike group had already been scheduled to go to the Middle East, but that its movement was "expedited" due to heightened tension with Iran.

Iran's top security body dismissed the US plan to send forces to the region as "psychological warfare."

Announcing details of the force on Tuesday, the US military did not provide specific details of intelligence it may have about an Iranian threat.

US Central Command, which is responsible for US military operations in the Middle East and Afghanistan, requested additional forces following "recent and clear indications" that Iranian and proxy forces were making preparations to possibly attack US forces in the region, Urban said.

He said the credibility of those threats was based on sources and methods through which the information was obtained, something the US military was not able to discuss.

The military has said the threat to US forces was on land and at sea, but declined to provide further details.

"US Central Command continues to track a number of credible threat streams emanating from the regime in Iran throughout the CENTCOM area of responsibility," Urban said.

US officials have told Reuters that the intelligence was based on specific and "credible" threats to US forces in Iraq, Syria and the broader region.

One US official, speaking on the condition of anonymity, said there were indications that Iran appeared to be moving short-range ballistic missiles on boats in the Middle East.

The United States has previously accused Iran of providing parts of such missiles to Houthi rebels in Yemen fighting a Saudi-led coalition backed by the United States. It is unclear how this intelligence was different.