The status of Jerusalem, home is one of the biggest obstacles to reaching an Israeli-Palestinian peace deal. 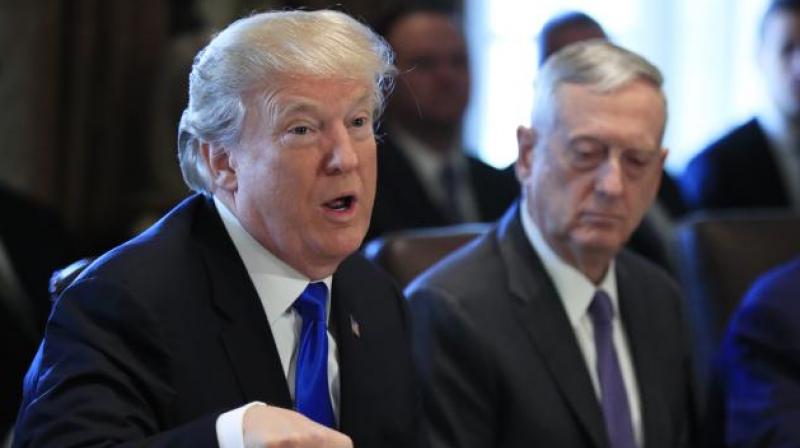 Trump reversed decades of US policy by recognizing Jerusalem as the capital of Israel, imperilling Middle East peace efforts and upsetting US friends and adversaries alike. (Photo: AFP)

Washington: The United States is asking Israel to temper its response to the US recognition of Jerusalem as its capital because Washington expects a backlash and is weighing the potential threat to US facilities and people, according to a State Department document seen by Reuters on Wednesday.

"While I recognize that you will publicly welcome this news, I ask that you restrain your official response," the document dated December 6 said in talking points for diplomats at the US Embassy in Tel Aviv to convey to Israeli officials.

"We expect there to be resistance to this news in the Middle East and around the world. We are still judging the impact this decision will have on US facilities and personnel overseas," the document said.

A second State Department document seen by Reuters, which was also dated December 6, said the agency had formed an internal task force "to track worldwide developments" following the US decision on Jerusalem.

A US official who spoke on condition of anonymity said it was standard to set up a task force "any time there is a concern about the safety and security of US government personnel or US citizens."

The State Department had no immediate comment on either document.

Trump reversed decades of US policy by recognizing Jerusalem as the capital of Israel, imperilling Middle East peace efforts and upsetting US friends and adversaries alike.

The first document also laid out talking points for officials at the US Consulate General in Jerusalem, the US Embassies in London, Paris, Berlin and Rome and the US mission to the European Union in Brussels.

In its message for the European capitals, the document asked European officials to argue that Trump's decision did not prejudge so-called "final status" issues that Israel and the Palestinians need to hammer out in any peace agreement.

"You are in a key position to influence international reaction to this announcement and we are asking you to amplify the reality that Jerusalem is still a final status issue between Israelis and Palestinians and that the parties must resolve the dimensions of Israel's sovereignty in Jerusalem during their negotiations," it said.

"You know that this is a unique Administration. It makes bold moves. But it is bold moves that are going to be needed if peace efforts are finally going to be successful," it said.

The status of Jerusalem, home to sites holy to the Muslim, Jewish and Christian religions, is one of the biggest obstacles to reaching an Israeli-Palestinian peace deal.

Israel considers Jerusalem its eternal and indivisible capital and wants all embassies based there. Palestinians want the capital of an independent state of their own to be in the city's eastern sector, which Israel captured in the 1967 Middle East war and annexed in a move never recognized internationally.