World   Americas  07 Dec 2017  The what, why, how of Trump's Jerusalem declaration
World, Americas

The what, why, how of Trump's Jerusalem declaration

'Israel is a sovereign nation with the right...to determine its own capital,' Trump said in his speech. 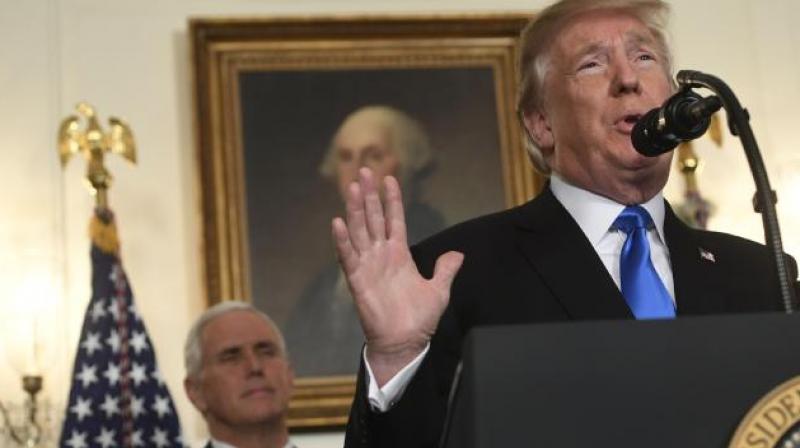 The world waited with bated breath since Monday amid reports of ‘delay’ in President Donald Trump’s statement. (Photo: AFP)

The world waited with bated breath since Monday amid reports of ‘delay’ in President Donald Trump’s statement.

Was he really going to step out of years of convention, derail decades-long US policy towards Middle East, and threaten unrest and possible bloodshed across the Muslim world to publicly acknowledge Jerusalem as Israel’s capital?

So when, on Wednesday Trump finally made his decision-unequivocally and independently- the world sighed, and yet perhaps it was not a sigh of relief.

Through a carefully worded and (surprisingly) uncontroversial speech, Trump had opened a can of worms. “Israel is a sovereign nation with the right, like every other sovereign nation, to determine its own capital. Acknowledging this as a fact is a necessary condition for achieving peace,” he said.

In doing so, Trump had neglected the warnings from Arab leaders, the global community as well as from fellow Congressmen.

Congressmen David Price, Peter Welch, John Yarmuth, Barbara Lee and Earl Blumenauer issued a joint statement claiming that such an announcement would indicate "his complete disregard" for long-standing American and international diplomatic practice. "It unilaterally undermines prospects for a peaceful resolution to the Israeli-Palestinian conflict and recklessly endangers US, Israeli, and regional security. For more than 50 years, Republican and Democratic Administrations have recognised that the US should stand as a good faith arbiter for peace between the Israelis and the Palestinians," they said.

Foreign Minister of the Kingdom of Jordan, Ayman Safadi took to Twitter, running an open campaign against Trump. On December 3, Safadi tweeted claiming that he had communicated to his counterpart in US, Secretary of State Rex Tillerson “on dangerous consequences of recognizing Jerusalem as capital of Israel. Such a decision would trigger anger across Arab, Muslim worlds, fuel tension and jeopardize peace efforts.”

Saudi Arabia’s King Salman warned Trump on December 5 that moving the embassy would be precarious and could provoke Muslims in the region.

“The two expressed their hope that the US administration reconsiders its plan before making a final decision, due to its potentially dangerous impact on the region and the peace negotiations,” Egypt Today reported, referring to the meeting between Egyptian and French foreign ministers.

Turkish President Recep Tayyip Erdogan went so far as to say that he would not abstain from severing diplomatic ties with Israel if Trump went ahead with a move that he said was in ‘red line’ with the Muslims.

Morocco, Iraq, Iran, Congressman Alcee Hastings, Congresswoman Betty McCollum, joined the wagon that in so many ways tried to stop the US President from distempering (the already deadlocked) Israel-Palestine peace process .

Ironically, warnings such as these only come when the least wanted outcome is also the most possible one. The truth was, with or without the statement, the world knew that Trump had made up his mind. So when the sun rose on Wednesday, it took away with it the last shadow of doubt that many were clinging on to.

For anybody who was paying attention, this was not in the least unforeseen.

Keeping with the Embassy Act of 1995, like all presidential candidates, Trump had vowed to shift the US Embassy from Tel Aviv to Jerusalem during his presidential campaign.

The Embassy Act was passed on October 24, 1995. An evening before Israel’s then Prime Minister Yitzhak Rabin’s speech, wherein he declared that “There are no two Jerusalems. There is only one Jerusalem. For us, Jerusalem is not subject to compromise, and there is no peace without Jerusalem.”

The roots of the Embassy Act can in one way be traced back to the Balfour Declaration, UN General Assembly Resolution 181 and the Oslo Accords -- which is when the advocacy for the bill was at its highest. According to this law, the US government was required to shift its Embassy to Israel from Tel Aviv to Jerusalem by 31 May, 1999. Conversely, it allowed US Presidents to waiver the bill.

Clinton, Bush and Obama failed, or rather, abstained from doing so, choosing instead to toe the diplomatic line so as to remain neutral between conflicting Israel and Palestine, both of which consider Jerusalem holy.

With Trump however, things were clear as far back as November, 2016, when Jason Greenblatt- Trump’s advisor for Israel- told Army Radio after the elections, “The two sides are going to have to decide how to deal with that region, but it’s certainly not Mr. Trump’s view that settlement activity should be condemned and that it is an obstacle to peace, because it is not the obstacle to peace.”

He also said that Trump was “going to do it” because he was “a man who keeps his word.”

A new era for Middle East?

“My announcement today marks the beginning of a new approach to conflict between Israel and the Palestinians,” Trump said without elucidating what this ‘new approach’ might be.

As Vox reporters, Jennifer Williams and Sarah Wildman have pointed out, “Though Trump affirmed Jerusalem as the capital of Israel, he didn’t call it the undivided capital of Israel -- suggesting the US would still support potentially dividing Jerusalem between the Israelis and the Palestinians as part of future peace negotiations.”

White House officials’ stress on the fact that the President- elect’s announcement in no way points towards the ‘final status’ and that Trump was “not taking a position on any final status issues, including the specific boundaries of the Israeli sovereignty in Jerusalem or the resolution of contested borders,” only creates room for more confusion.

“Without question, Jerusalem is one of the most sensitive issues in those talks. The United States would support a two-state solution if agreed to by both sides,” Trump said in his speech on Wednesday.

The primary impediment to the peace process between Israel and Palestine has been the issue of Jerusalem. Arabs and Jews have now for five decades laid claims and counter claims over the city. A number of diplomatic efforts to realize a two-state solution have failed -- the last one as recent as 2013-14.

Keeping this in mind, Trump’s pre-emptive announcement and recognition of Jerusalem as Israel’s capital before the realization of a two-state solution is only counter-productive even if he claims “to do everything in my power to help forge such an agreement.”

For two nations that were born out and live off of war, both asserting equally for the same rights on the much contended Jerusalem and both diffident on their points, Trump’s announcement is nothing more than a subtle indicator toward whose side he is on.

Though his carefully worded and unrecognisably humble speech was a breath of fresh air, with almost a year as President, the world has learnt to read between the lines.