Shooter succumbs to a self-inflicted gunshot during exchange of gunfire. 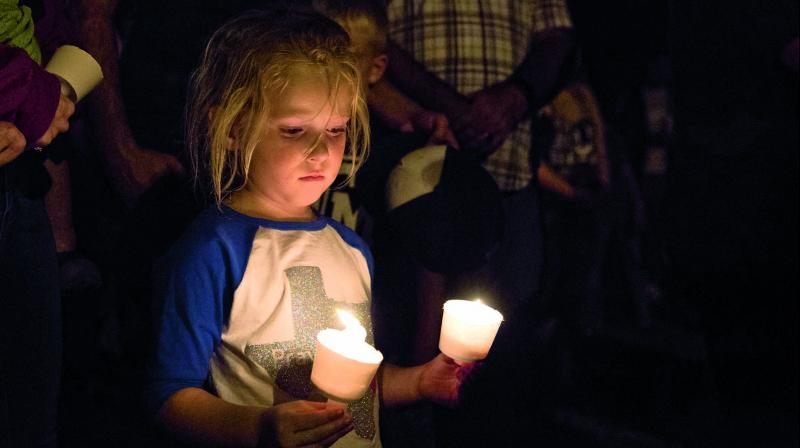 A candlelight vigil being observed at the First Baptist Church in Sutherland Springs, Texas. (Photo: AFP)

Sutherland Springs (Texas): A gunman opened fire inside a Baptist church in the US state of Texas, killing at least 27 people, including the pastor’s 14-year-old daughter, officials said on Monday.

The incident, which left at least 20 other people injured, occurred on Sunday at the First Baptist Church in Sutherland Springs in Wilson County where a man in “full gear” barged into the church and began shooting paris-hioners. The gunman was killed in the aftermath, the local media quoted police as saying, although it is not sure if the deputies killed the shooter or he took his own life.

President Donald Trump said the nation was living through “dark times” but guns were not to blame for Sunday’s carnage, which came just five weeks after the worst mass shooting in modern US history.

“I think that mental health is your problem here,” said the US President, speaking in Tokyo as part of his  Asia tour. “This was a very — based on preliminary reports — a very deranged individual.”

“This isn’t a guns situation,” Mr Trump insisted, calling it “a mental health problem at the highest level.”

The victims, who ranged in age from five to 72, were gunned down at First Baptist Church in Sutherland Springs, a rural community of some 400 people 50 km southeast of San Antonio.

The gunman, widely identified as Devin Kelley, 26, was described by authorities as a young white male who was found dead in his vehicle after being confronted by a local resident.

The Air Force said Kelley served at a base in New Mexico starting in 2010 before being court-martialed in 2012 for allegedly assaulting his wife and child. He was sentenced to 12 months in confinement.