World   Americas  07 Aug 2020  US to end reliance on China, other nations for pharmaceuticals and medical supply
World, Americas

US to end reliance on China, other nations for pharmaceuticals and medical supply

Trump said he had signed a new executive order to ensure that when it comes to essential medicines, the US buys from American sources 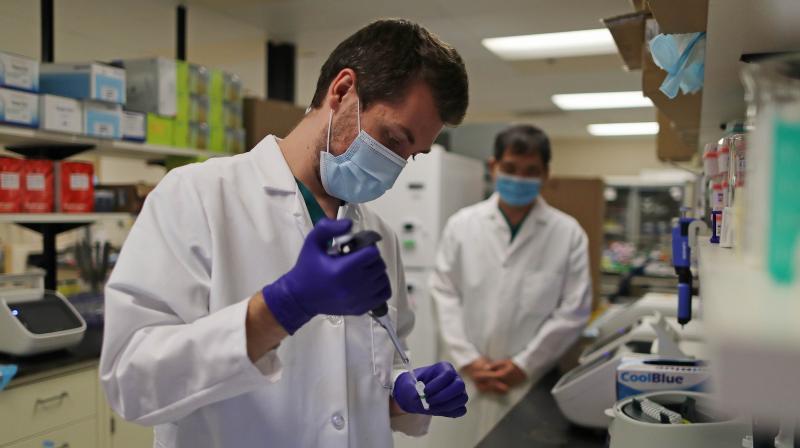 "As seen in this pandemic, the United States must produce essential equipment, supplies, and pharmaceuticals for itself," Trump said. (Representational Image: AFP)

Washington: The US will end its reliance on China and other foreign nations for pharmaceuticals and medical supplies, President Donald Trump has said, asserting that Beijing would have to pay the price for the wound it has inflicted on America and the world by spreading the deadly coronavirus.

President Trump and leaders of several countries have accused China of not being transparent in reporting the deadly disease, leading to huge human casualties and economic crisis across the world.

China, however, has denied US' accusation of covering up the extent of its coronavirus outbreak and accused America of attempting to divert public attention by insinuating that the virus originated from a virology laboratory in Wuhan.

"What China did is a terrible thing. Whether it was incompetence or on purpose, it was a terrible thing that they did not only to the United States but to the world. A terrible thing," Trump told reporters at the White House on Thursday before flying to Ohio to visit a Whirlpool manufacturing plant.

"What China did to the rest of the world and the US is a disgrace," said the president, asserting that Beijing would have to pay the price for the wound it has inflicted on America and the world by spreading the deadly coronavirus.

"Over the course of the next four years, we will bring our pharmaceutical and medical supply chains home and we will end reliance on China and other foreign nations," Trump said as he laid out his vision to bring millions more jobs and thousands more factories back to American shores.

"Today, to define our path forward, I am making our incredible workers six more promises that I will keep over the next four years. First and foremost, we will defeat the China virus," he said, adding that the strategy shelters those at highest risk while allowing those at lower risk to get safely back to work and school.

Instead of a never-ending blanket lockdown, causing severe long-term public health consequences, "we have a targeted and data-driven approach", he said.

"Today, using the Defense Production Act, we are engaged in the most rapid industrial mobilisation since World War II. Over the last six months, we have witnessed one manufacturing miracle after another," he said.

"My fifth promise to American workers is to bring back American jobs and factories using every tool at my disposalincluding tariffs, countervailing duties, and new trade deals based on the principle of fairness and reciprocity," he said.

"As long as I am President of the United States, I will fight for you with every ounce of energy and strength that I have. I will be your voice. I will defend your jobs. I will stand up to foreign trade cheaters and violators," Trump said.

As seen in this pandemic, the United States must produce essential equipment, supplies, and pharmaceuticals for itself, he said.

"And speaking of pharmaceuticals, we instituted four moves, rebates, favourite nations, and other things buying from other nations where they have the product, the same exact pills, identical, made in the same factory for a fraction, just a small fraction of the cost. We buy from other countries as opposed to buying through this ridiculous quagmire of political scam that we've been going through for many years," Trump said.