The book quickly rose to third on Amazon's list of bestselling books after the president encouraged his Twitter followers to order a copy. 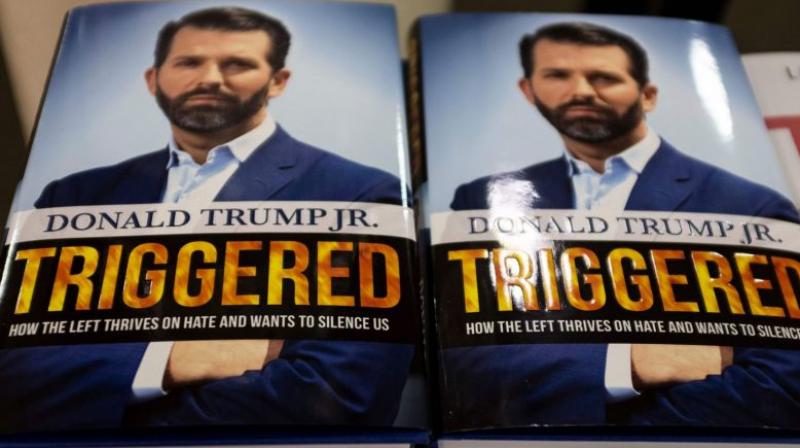 New York: Donald Trump Jr. released a book Tuesday that rails against the left as he admitted he had caught the political bug and may consider running for office in the future.

In "Triggered: How the Left Thrives on Hate and Wants to Silence US," the president's son fiercely defends his father and slams mainstream media and political opponents including Hillary Clinton.

"This is the book that the leftist elites don't want you to read!" screams a blurb on Amazon, adding that "no topic is spared from political correctness."

Trump Jr. dedicates the 300-page part memoir to "deplorables," a clear dig at Clinton who used the term to describe Trump supporters during the 2016 presidential campaign.

The book quickly rose to third on Amazon's list of bestselling books after the president on Monday encouraged his 66.5 million Twitter followers to order a copy.

"A great new book that I highly recommend for ALL to read," Trump tweeted.

Trump Jr, known for his virulent attacks on traditional media including The New York Times and the Washington Post, accuses social networks of trying to sensor him and other conservatives.

"This 'shadow banning' amounts to a complete suppression of freedom of speech. It can't be allowed to continue," he writes in the book, taking aim at Facebook, Instagram and Twitter.

While Ivanka Trump was thought to be the most political of the president's four adult children owing to her role as a White House advisor, Trump Jr hinted Tuesday that he may be tempted to run one day.

"I don't rule anything out. Right now I like the campaigning part. I actually enjoy some of that fight," he told CBS in an interview.

"I like getting out there and being with real people and seeing the difference that my father and his policies are making in their lives.

"I'm interested in winning 2020 for my father right now. We'll worry about everything else later," the 41-year-old added.

"Triggered" is published by Centre Street, a known publisher of conservative books.

Trump Jr was to sign copies at a Barnes and Noble in Manhattan later on Tuesday.

The president has published several books, most famously "Trump: The Art of the Deal" in 1987 which became a New York Times bestseller.