To US diplomat in China quits over Trump's climate policy

The department confirmed Rank's retirement, saying it was a 'personal decision' but offered no details about his reasons for stepping down. 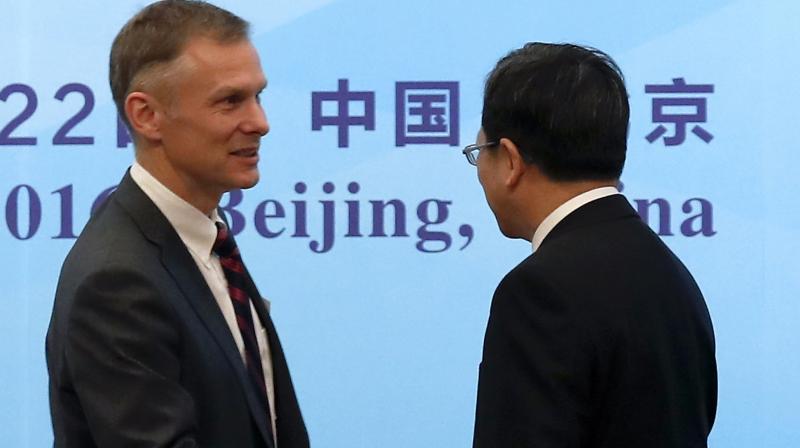 Washington: The top-ranking diplomat at the US Embassy in Beijing has abruptly resigned, telling colleagues he is leaving the foreign service over disagreements with Trump administration policy, US officials has said.

State Department officials familiar with David Rank's resignation said he announced his retirement on Monday at a town hall meeting of embassy employees and cited President Donald Trump's decision to withdraw from the Paris climate accord as a reason.

The officials spoke on condition of anonymity because they were not authorised to discuss the matter. The department confirmed Rank's retirement, saying it was
a "personal decision" but offered no details about his reasons for stepping down.

Rank was a 27-year career foreign service officer with experience in Afghanistan, Taiwan, Greece and Mauritius.

He was No. 2 at the embassy, in charge pending the arrival of Trump's new ambassador to China, former Iowa Gov. Terry Branstad, who was confirmed by the Senate last month. Rank's resignation was first reported by John Pomfret, editor-at-large for the website, SupChina.

Trump announced America's withdrawal from a global climate change pact last week. That kept an election campaign promise, but fanned fears of the US abdicating its global leadership role and shunning international consensus on the world's most pressing issues.

Secretary of State Rex Tillerson was among Trump's advisers who had been quietly lobbying for the US to stay in the pact. Cooperation with China on combating climate change was often cited by the Obama administration as an area in which Washington and Beijing were able to work together, despite tensions in other areas of the relationship.

China and the US are the world's two largest emitters of man-made carbon dioxide, considered a top cause of climate change, and agreement between them on capping emissions helped pave the way for the Paris agreement among more than 190 nations.