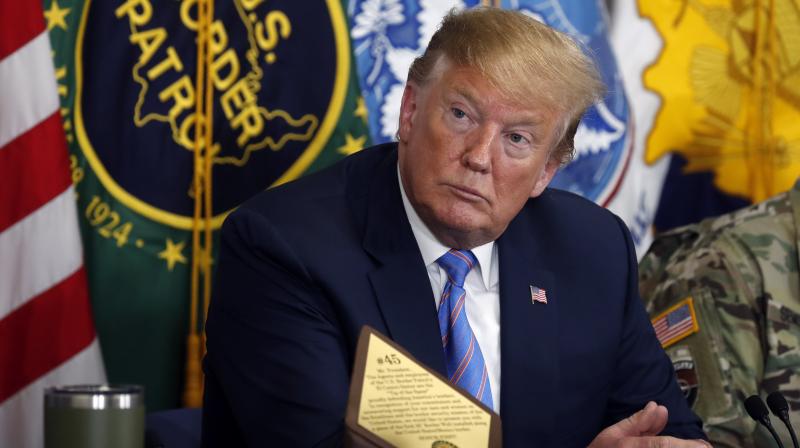 Trump has refused to make public past tax returns, while retaining ownership in many enterprises. (Photo:AP)

Washington: An attorney for President Donald Trump on Friday blasted US House Democrats’ request for six years of Trump’s tax returns as “a misguided attempt” to politicize the tax laws, accusing lawmakers of harassment and interference in IRS audits.

In a statement that mapped out the legal battlefield ahead, William Consovoy said the request, formally filed on Wednesday by US House of Representatives tax committee Chairman Richard Neal, flouts “constitutional constraints.”

“The requests for his private tax information are not consistent with governing law, do not advance any proper legislative purpose, and threaten to interfere with the ordinary conduct of audits,” Consovoy said.

“We are confident that this misguided attempt to politicize the administration of the tax laws will not succeed,” he said.

One of the many investigations targeting Trump on Capitol Hill and in the US court system, the House Democrat’s probe into the president’s tax returns could pull back the curtain on his business empire and his reputation as a savvy dealmaker.

Unlike previous presidents over recent decades, Trump has refused to make public past tax returns, while retaining ownership in many enterprises, ranging from golf courses and hotels to Trump Tower in New York City and his Mar-a-Lago private club in Florida.

Concerns about possible conflicts of interest have simmered since Trump moved into the White House in January 2017, along with lingering questions from his presidential campaign about his net worth, tax profile and past financial dealings.

Seeking answers to such questions, Neal this week invoked a law that gives the head of the tax committee the power to ask the Internal Revenue Service for a president’s returns. He is seeking both Trump’s personal and business tax returns.

Asked on Friday about Neal’s request, Trump said before leaving the White House for a trip to California, “From what I understand the law is 100 percent on my side.”

Congressional Republicans oppose Neal’s effort, saying such a move sets a dangerous precedent by turning the confidential tax documents of a US citizen into a political weapon.

A tax committee spokesman said it had no comment for now. An IRS spokesman did not immediately respond to a request for comment, and a spokeswoman for the Justice Department declined to comment.

When Neal filed his request to IRS Commissioner Charles Rettig two days ago, Neal said it was “critical to ensure the accountability of our government and elected officials.”

Trump’s former personal lawyer Michael Cohen recently testified in Congress that he did not believe the president was being audited, but may have used the audit claim to avoid scrutiny that could lead to an audit and IRS tax penalties.

In a letter to Treasury General Counsel Brent McIntosh on Friday, Consovoy called the request “a transparent effort by one political party to harass an official from the other party because they dislike his politics and speech.”

He argued that any request from the House committee for private tax returns would need to have a legitimate legislative purpose, which he said Neal’s request lacked.

Consovoy said the IRS should not comply with the request until it receives a formal legal opinion from the Justice Department’s Office of Legal Counsel.

Consovoy is also Trump’s personal lawyer in a case accusing him of violating anti-corruption provisions of the US Constitution with his Trump International Hotel in Washington, D.C., which is pending at the 4th US Circuit Court of Appeals.