From sex scandal to misuse of office, political conventions fail to pierce the post-truth armour of the prez 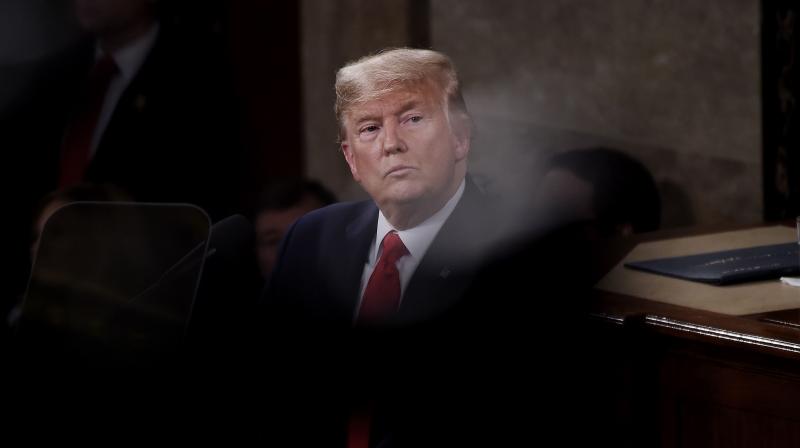 U.S. president Donald Trump delivers the State of the Union address in the chamber of the US House of Representatives at the US Capitol Building on February 4, 2020 in Washington, DC. (AFP)

Washington: Impeached for abuse of power, U.S. president Donald Trump's acquittal by the Senate is just the latest escape for the real estate tycoon turned politician who has repeatedly defied the odds.

The following are some of the events that could have torpedoed his political fortunes:

On October 7, 2016, one month before the presidential election, a decade-old recording is released on which Trump is heard talking about women in extremely crude terms.

The now infamous Access Hollywood tape features Trump -- then the billionaire host of the hit reality show The Apprentice -- boasting that his celebrity gave him licence to grope women with impunity.

As prominent Republicans voiced their disgust, the scandal appeared set to derail Trump's White House bid -- as pundits widely predicted it would cost him the women's vote.

At least 17 women have accused Trump of sexual harassment or sexual assault -- accusations the president has denied.

On August 12, 2017, white supremacist, neo-Nazi and anti-Semitic groups -- emboldened by Trump's election on an anti-immigration platform -- gathered in Charlottesville, Virginia for a rally.

Counter-protesters flocked to the city and clashes broke out. One neo-Nazi deliberately ploughed his car into a crowd of protesters, killing a 32-year-old woman.

Trump reacted to the clashes by saying there were "very fine people" on both sides.

His comments sparked a wave of indignation including in his own Republican Party. But the outrage soon faded, and Trump was able to move on from the incident.

But while Cohen has since been jailed for violating campaign finance laws, Trump escaped largely unscathed by the lurid revelations -- which did little to dent his support even among religious conservatives.

In May 2017, former FBI director Robert Mueller was named as special counsel to investigate whether any members of Trump's presidential campaign conspired with Russia to get him elected, as well as subsequent efforts by the president to obstruct justice.

The Mueller probe uncovered a trail of misdeeds that led to charges against half a dozen former Trump associates including his former campaign manager Paul Manafort, confidant Roger Stone, former top aide Michael Flynn and Cohen.

Rejected by Trump as a "witch hunt," the probe cast a long shadow over the White House throughout the first half of his presidency.

Although the 22 month investigation did not exonerate Trump, Mueller adhered to a Justice Department policy against charging sitting presidents -- which ultimately allowed Trump to declare himself cleared.

Trump is the first US president since Richard Nixon not to have made his tax returns public, claiming they are under audit by the Internal Revenue Service.

In October 2016, The New York Times revealed that Trump reported over $1 billion in business losses in 1995 -- potentially allowing him to avoid paying income tax for two decades.

Democrats in the House of Representatives have since turned to the courts to force the release of Trump's tax returns and other records in cases that are considered a crucial test of the separation of powers.

But the president has so far managed to rebuff their demands, with the cases tied up in the US court system.