US President Donald Trump said that tolerance for illegal immigration is not compassionate -- it is cruel. 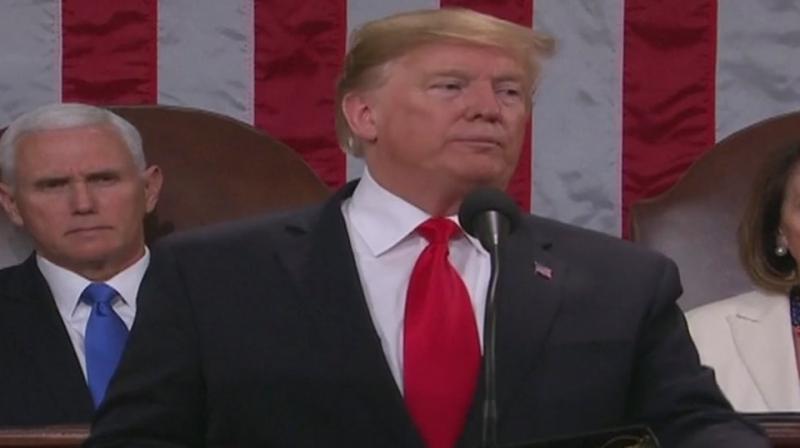 'An economic miracle is taking place in the United States -- and the only thing that can stop it are foolish wars, politics or ridiculous partisan investigations,' the president said. (Photo: ANI | Twitter)

Washington: US President Donald Trump on Wednesday called for rejecting politics of revenge, resistance and retribution, but insisted on building a wall along the US-Mexico border as he appeared before a divided Congress for his annual State of the Union address.

His calls for reconciliation were met with mostly stone-faced silence from Democrats, who bitterly oppose his agenda and accuse him of hastening the decline in cross-party cooperation. The president and the Democrats had a record 35-day standoff with the Democrats led by House Speaker Nancy Pelosi over his proposed controversial wall along the US-Mexico border, which shut down the government and postponed the address which was earlier scheduled on January 29.

"We must reject the politics of revenge, resistance and retribution," Trump told Congress near the beginning of his State of the Union address, claiming in his speech that he is putting forward "the agenda of the United States."

"An economic miracle is taking place in the United States -- and the only thing that can stop it are foolish wars, politics or ridiculous partisan investigations," the president said.

He said that tolerance for illegal immigration is not compassionate -- it is cruel. "The lawless state of our southern border is a threat to the safety, security, and financial well-being of all Americans. We have a moral duty to create an immigration system that protects the lives and jobs of our citizens,” Trump said in his State of the Union Address.

"This includes our obligation to the millions of immigrants living here today, who followed the rules and respected our laws. Legal immigrants enrich our nation and strengthen our society in countless ways. Now is the time for the Congress to show the world that America is committed to ending illegal immigration and putting the ruthless coyotes, cartels, drug dealers, and human traffickers out of business," he said.