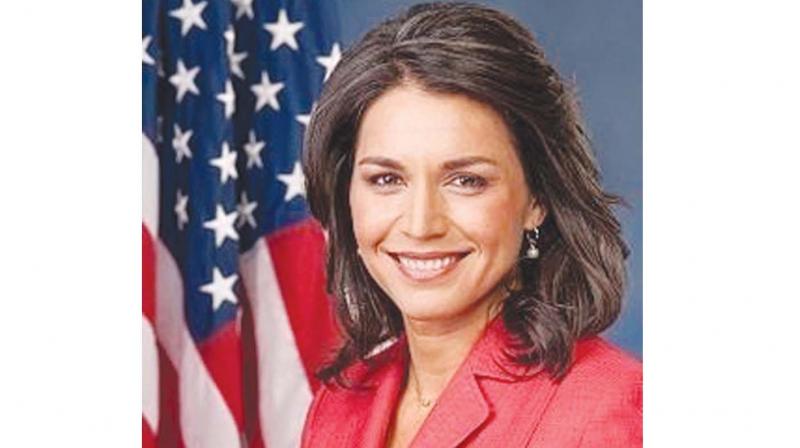 Both Gabbard and Harris have a wide support base in the Indian-American community (Photo:Twitter)

Washington: Kamala Harris, the first Indian-origin Senator and Tulsi Gabbard, the first Hindu lawmaker in the US Congress, the two 2020 Democratic presidential candidates, on Tuesday announced tour of four States which will hold the Democratic primaries early next year.

Harris, 54, would travel to South Carolina, New Hampshire, Iowa and Nevada later this month, her campaign said. Daughter of an Indian-American from Tamil Nadu, Harris had formally launched her campaign late last month from her hometown of Oakland which was attended by an impressive 20,000 people.

In less than an hour of her formal launch, she raised more than USD1.5 million. Tulsi Gabbard, 37, the Democratic colleague of Harris in the House of Representatives, who formally launched her campaign over the weekend would be in Iowa and Chicago this month, according to an announcement by her campaign.

"In Chicago, Tulsi will be visiting faith and advocacy leaders from a spectrum of denominations and cultural backgrounds. In Iowa, Tulsi will be sitting down with community leaders including the Asian-American, Latino, and youth communities," a media release said.

Both Gabbard and Harris have a wide support base in the Indian-American community, which constitutes just one per cent of the US population, but are known for their fund-raising capabilities.

The Super Tuesday is scheduled for March 3 which will have primaries in Alabama, California, Massachusetts, North Carolina, Oklahoma, Tennessee, Texas, Vermont, and Virginia. Several of the other Democratic presidential candidates have also announced their intention to be in these early primary States this month.