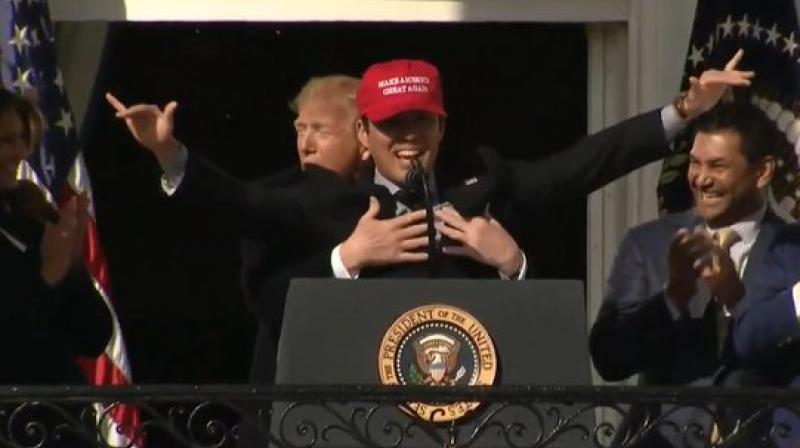 "America fell in love with Nats baseball," Trump told a crowd of players and hundreds of red-clad Nationals fans gathered under sunny skies on the South Lawn of the White House. (Photo: Twitter)

Washington: US President Donald Trump welcomed the Washington Nationals to the White House on Monday, saying their improbable World Series title -- and impeachment -- was all anybody wanted to talk about in the nation's capital.

"America fell in love with Nats baseball," Trump told a crowd of players and hundreds of red-clad Nationals fans gathered under sunny skies on the South Lawn of the White House.

"They just fell in love with Nats baseball," Trump said after the Marine Corps Band played a rendition of the team's theme song, the children's ditty "Baby Shark."

"That's all they wanted to talk about," the president said. "That and impeachment.

Ceremonial White House visits by sports title-winning teams have become controversial under Trump, who was loudly booed at Nationals Park when he attended Game 5 of the World Series against the Houston Astros and serenaded with chants of "Lock him up!"

Several teams have declined to make White House visits or have not been invited, including the NBA's Golden State Warriors, the NFL Super Bowl champion Philadelphia Eagles and the US women's World Cup-winning team.

Most of the Nationals title-winning squad attended Monday's event with the notable exceptions of star third baseman Anthony Rendon, reliever Sean Doolittle and a handful of others.

There was no immediate explanation for Rendon's absence but Doolittle had announced ahead of time that he would boycott the ceremony.

"There's a lot of things, policies that I disagree with, but at the end of the day, it has more to do with the divisive rhetoric and the enabling of conspiracy theories and widening the divide in this country," Doolittle told The Washington Post.

Trump congratulated the Nationals on becoming the first Major League Baseball team in Washington to win the World Series in nearly 100 years.

He said they had "captured the hearts of baseball fans" across the country and "reminded us why baseball is truly America's pastime."

Trump called several players up to the podium to say a few words and hugged catcher Kurt Suzuki when he made his brief remarks wearing a red "Make America Great Again" hat.

"I didn't know that was going to happen," Trump said.

First baseman Ryan Zimmerman, the only player who has been with the franchise since it came to Washington in 2005 from Montreal, presented the 45th president with a Nationals jersey with his name and the number 45 on the back.

"This is an incredible honor," Zimmerman said. "And we'd also like to thank you for keeping everyone here safe in our country, and continuing to make America the greatest country to live in the world."

Trump did not mention Rendon or Doolittle or any of the other half-a-dozen absent players during his remarks recounting the team's exploits.

The Nationals rallied to defeat Houston 6-2 on Wednesday to win the World Series crown by four games to three.

After a horrible 19-31 start to the season, at one point oddsmakers gave them a .01 percent chance to win the title.