US, China were month from potentially 'epic' trade agreement: Trump

Despite Trump's rosy gloss on trade talks with China, US Trade Representative Lighthizer said major issues were left to be resolved. 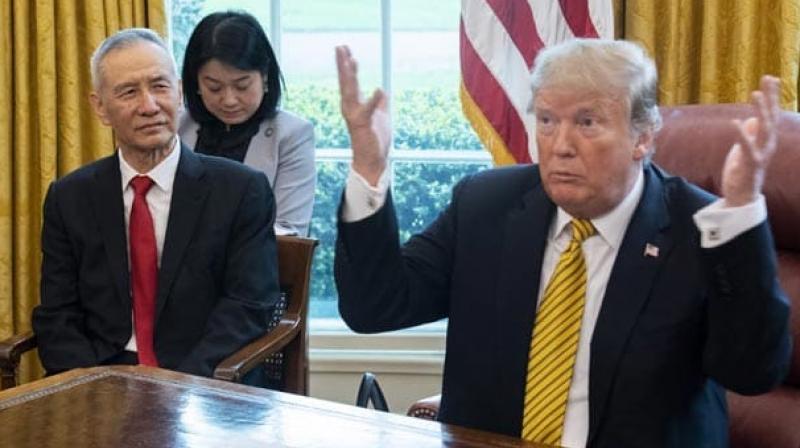 Washington: US President Donald Trump on Thursday said the United States and China were a month from a potentially "epic" trade agreement.

But, nine months into the two countries' trade war, the announcement was anti-climactic, as the White House had earlier stoked anticipation that Trump could announce a date for a summit to clinch a final deal with his Chinese counterpart Xi Jinping.

Global markets had also rallied in recent days, roused by the hope that an end to the skirmish between the world's two top economies was at last at hand.

"We will probably know over the next four weeks. It may take two weeks after that," Trump told reporters following a meeting with Beijing's trade envoy Liu He.

The talks are due to continue for a third day on Friday. Trump had said as far back as February that a summit could occur within a month.

Despite Trump's rosy gloss on the talks on Thursday, US Trade Representative Robert Lighthizer told reporters that major issues were left to be resolved.

Both US and Chinese officials have projected cautious optimism for months, but the last mile is proving to be the hardest, with the two sides reportedly tussling over whether and when Washington should remove the punishing tariffs it imposed last year on Chinese goods.

Trump in early 2018 launched a trade war with China, seeking to slash that country's soaring trade surplus with the United States, end alleged unfair trade practices such as the theft of American technology and China's massive state intervention in markets.

Washington and Beijing since last year have imposed tariffs on more than $360 billion in two-way trade, biting into their manufacturing sectors as the world economy slows.

China has floated offers to make sizable purchases of US commodities and taken steps to show it will protect foreign intellectual property.

But Democrats have warned of the temptation to accept a superficial deal that does not extract profound changes to the Chinese industrial policies American officials have long denounced.

Trump reiterated Thursday however that, "if it's not a great deal, we're not doing it."

Chinese state media later carried a report which said Xi has called for the talks to conclude as soon as possible.

"I hope the two sides of the economic and trade teams will continue to resolve both sides' issues of concern in the spirit of mutual respect, equality, and mutual benefit, and finish negotiations on the China-US economic and trade agreement document as soon as possible," Xinhua quoted Liu as saying, as he conveyed a message from Xi to Trump.

A final sticking point appears to be when and how Washington will agree to lift the steep tariffs it has placed on more than USD 250 billion in Chinese imports.

Last month, Trump said the tariffs would stay in place for "a substantial period," although whether this would apply to both tranches of goods subjected to the new duties was unclear.

US officials demand that any agreement have teeth and Lighthizer, the US trade representative, has said tariffs offer crucial leverage should Beijing backslide on its commitments.

Gary Clyde Hufbauer, a former US trade official and senior fellow at the Peterson Institute for International Economics, said lifting the tariffs too early could encourage criticism from Democrats that he had gone soft in the negotiations.

"The White House response to this drama is to keep the tariffs and only to slowly lower the rate as the Chinese fulfill their commitments," Hufbauer told AFP.

"The Chinese strategy is to have them get rid of it," he said. "My guess is that something in between will be in the compromise."

Analysts say any agreement is likely to include banner announcements that China has agreed to increase purchases of American commodities like soybeans and fuel.

This could perversely serve to give Chinese state enterprises a greater market role while making US exporters more reliant on the Chinese government's purchasing decisions -- both possibly contrary to US objectives and interests.

William Reinsch, a trade expert at the Centre for Strategic and International Studies and former Commerce Department official for exports, pointed to Beijing's boycott of US soybean exports last year.

"The only way they can buy every bean is if we stop selling to everybody else and that puts us in an enormous position of vulnerability," he said.