Suspension of Pak aid not related to release of Hafiz Saeed: US official

US continues to have conversation with Pak not only on Haqqani network, Taliban but also on India-centric terrorist groups like LeT and JeM. 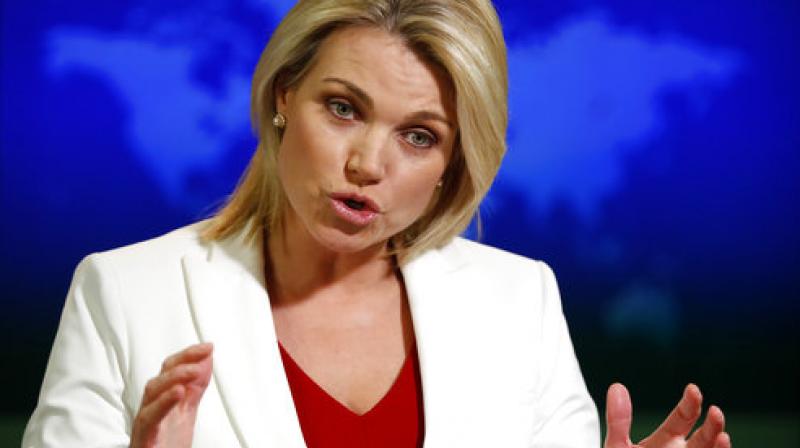 Nauert was responding to a question if the suspension of security assistance was related to Hafiz Saeed, the Mumbai attack mastermind who was released by Pakistan in November 2017. (Photo: AP)

Washington: The Trump administration’s decision to suspend over USD1.1 billion security assistance to Pakistan has nothing to do with Islamabad not taking action against Mumbai terror attack mastermind Hafiz Saeed, a US official has said.

“We have certainly expressed our concern about the mastermind of the 2008 Mumbai attacks being let out of house arrest in Pakistan. To my knowledge, that has nothing to do with that,” State Department Spokesperson Heather Nauert said at her daily news conference.

Nauert was responding to a question if the suspension of security assistance was related to Hafiz Saeed, the Mumbai attack mastermind who was released by Pakistan in November 2017.

“There is a USD 10 million reward out for information leading to his re-arrest, the person who is the mastermind of the Mumbai attacks who was let go in Pakistan. So we’ve been very clear about our displeasure with that individual being let go, and that’s why we like to remind people that there is a USD 10 million Rewards for Justice program out for him,” Nauert said.

A senior State Department official told reporters that the US continues to have conversation with Pakistan not only on Haqqani network, and Taliban, but also on India-centric terrorist groups like Lashkar-e-Taiba and Jaish-e-Mohammad.

“We can’t continue to have a relationship that has a business as usual with Pakistan. This conversation is not new to this administration. There have been concerns about Pakistan’s issue of sanctuaries for the Haqqani network and the Taliban. But we have concerns about their nuclear programme. We have concerns about the ability of anti-Indian groups like Lashkar-e-Taiba and Jaish e Mohammed to fund raise and operate,” the official who spoke on anonymity said.

Hafiz Saeed who was recently released from house arrest is among the issues that have been a feature of America’s conversation with Pakistan for many years.

Responding to a question, the official disputed the general impression coming out of Pakistan that it will not rearrest Hafiz Saeed as being demanded by the US.

The Pakistani’s have clearly indicated that they are unhappy with the public rhetoric of the Trump administration.

“What I would say to that is we had a number of months where we have had very serious conversations and private discussions with them and have not seen the responsiveness that we need. And at some juncture they knew that we were going to take additional steps if they did not respond to the requests that we made to them,” the State Department official said.

Appreciating the help of Pakistan in the release of Coleman family, the official said at the same time if there is “an ongoing relationship between elements of the security forces in Pakistan and the group that took the Colin Boyle family hostage that is a concern.”