Fight against terrorism: US plans to find common grounds with Pak

US Defense Secretary Mattis says he wants to work with Pakistan; listening to one another without being combative, to address the problems. 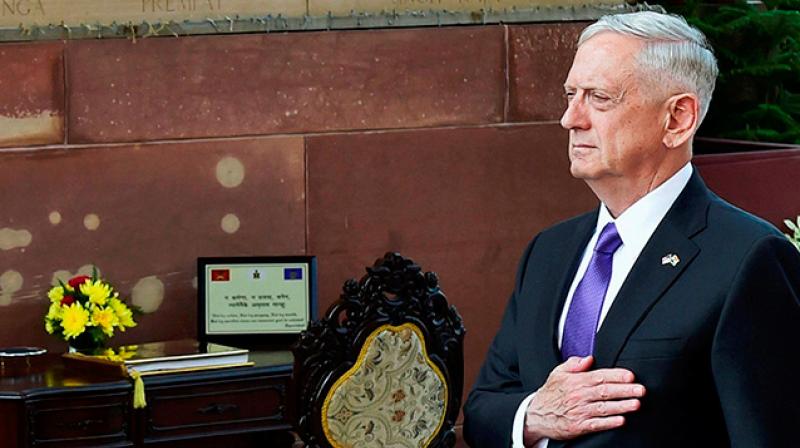 Mattis is the first top US official to visit Pakistan after the completion of the first 100 days of the new South Asia Strategy that was announced by President Donald Trump on August 21. (Photo: PTI/ File)

Washington: US Defence Secretary Jim Mattis has said that he intends to work hard to find common ground with Pakistan in the fight against terrorism, which is necessary to restore the level of stability in South Asia to allow economic development.

Mattis is on a five-day tour to Egypt, Jordan, Kuwait and Pakistan, since taking over the charge of the Pentagon. Visiting Islamabad about a week after the White House asked Pakistan to immediately charge and arrest the 26/11 Mumbai attack mastermind, Hafiz Saeed, in the absence of which it warned of repercussions, Mattis said he needs to talk to leaders in the country and gain their understanding.

Saeed is still roaming free, despite vigourous warning from the Trump Administration. "The first thing I'm going to do is do some listening, like I always do. My goal is to find common ground. I need to go, to sit down and listen to them, start there, start by listening," Mattis told reporters travelling with him on his way to Pakistan from Egypt.

Mattis is the first top US official to visit Pakistan after the completion of the first 100 days of the new South Asia Strategy that was announced by President Donald Trump on August 21.

"We know we have some common ground. They have lost hundreds, thousands of their innocent people and troops murdered and wounded by terrorists, so we know that there is a common ground," said Mattis.

Similarly, he said, there is common ground between Afghanistan and Pakistan, because there are terrorist groups that try to move back and forth in order to live in one and attack in the other.

"But at the same time, as the (Pakistan Army Chief) General (Qamar Javed Bajwa) has said, he wants no havens for terrorists anywhere, so we will work together and we'll find that common ground, if we have the will to,” he said.

"And then we'll work on how we address the problems where we can work together," the Defense Secretary said. Responding to a question, he said he would not characterize everything, over the past 16 years, as failures.

"There is clearly an abundance of areas where we have to double down, and I am optimistic at this point that because of what our adversaries, our mutual enemies are doing, that we can find ways to work together," he said.

Mattis said both Pakistan and Afghanistan, the Pakistan military, the NATO-led militaries of 39 nations have all been in fights in Washington.

"We've got to find a way to work together". He said there is "always an urgency to something" when 39 nations plus Afghanistan have their troops in the midst of a long war, where causalities are being taken.

"These are 39 of the most economically powerful, generally speaking, most long-term democratic institutions in the world. These are powerful nations morally, economically and diplomatically, and certainly militarily," he added.

Mattis said that it was essential in South Asia that all work together to restore the level of stability that allows for the economy to build.

"I mean, can you imagine a border between Pakistan and India where economic trade is not ongoing to the benefit of people on both sides of that border. We cannot only imagine it; it's a reality right now," Mattis said.

So, the US Defence Secretary said that we have got to work together on this, and there's a sense of urgency about that.

"There are people who are living below the poverty line in both those countries. So as you look at this problem, if you'll expand the problem you can understand the sense of urgency to move beyond violence and get back to the normal order of things," he said. Mattis is scheduled to meet Prime Minister Shahid Khaqan Abbasi and General Bajwa.

"General Bajwa is a mature officer with a deep background in not just military matters, but South Asia security issues, and we have got to find a way to move beyond this constant fighting that's characterized the area," he said.