North Korea’s missile and nuclear weapons programs are likely to be the issue dominating the first part of his trip. 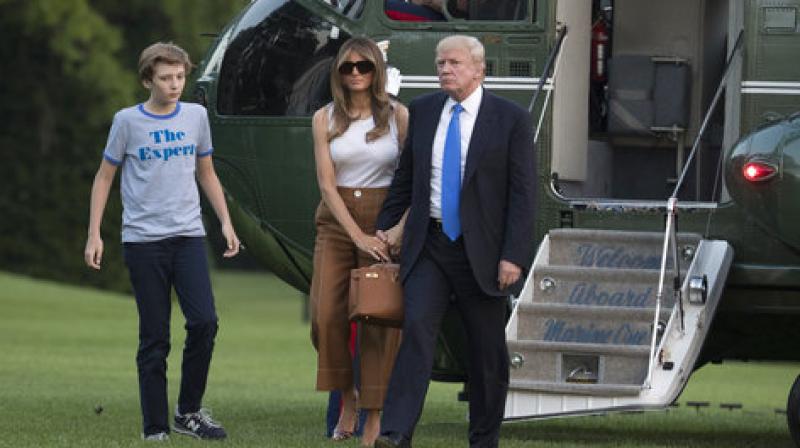 Trade will figure throughout, both in North Asia and at his stops in Southeast Asia for the Asia Pacific Economic Cooperation (APEC) summit in Vietnam and the Association of Southeast Asian Nations (ASEAN) leaders’ meeting in the Philippines. (Photo: AP/File)

Washington: President Donald Trump embarks on his first official visit to Asia, which begins Sunday in Japan. North Korea’s missile and nuclear weapons programs are likely to be the issue dominating the first part of his trip, which includes stops in South Korea’s capital and Beijing as well as Tokyo.

Trade will figure throughout, both in North Asia and at his stops in Southeast Asia for the Asia Pacific Economic Cooperation (APEC) summit in Vietnam and the Association of Southeast Asian Nations (ASEAN) leaders’ meeting in the Philippines. Here’s what people in those countries have to say about their expectations for the visit.

Yoh Kawakami, employee at an information management solution company: “I do wonder whether things will be OK, like, what will the world turn into? I wonder about his (Trump’s) response to North Korea and other things. There are things that scare me. He is becoming friendly with Prime Minister Abe and I don’t know if that is right or not.”

“I do want him (Trump) to be more cool-headed. If he continues only provoking, the situation may actually become explosive.”

Yumu Katsuyama, employee at nonprofit for international clinical childcare: “Honestly when he first became president, I did question whether he was OK. But my American friends have said that after he became president, their lives and the economy has gotten better. Personally, I have started thinking that it may be a good thing that he became president.”

Ock Hyun-woong, company worker: “President Trump is known to be a man of coercive control who makes controversial statements that get the attention of foreign media. While I don’t oppose President Trump’s visit to South Korea, I hope he can work well with South Korean-US issues, like the economy.”

Ding Chenling, technology investor and well-known tech blogger with 700,000 followers on China’s microblogging website Weibo: “Well, maybe our system is not that perfect yet, but it’s like a kid to the teacher. We don’t want to be lectured by the teacher. We want to have our own way. We want to grow our own self by ourselves. So I think that’s the reason the Chinese people like Trump. He casts aside the political correctness. He says `Oh yeah, it’s good, America may do business, we want to do business, we want to make money together.”’

Zhao Yingran, business development manager for a virtual reality video company: “So I very much respect President Xi from the bottom of my heart and I think under his leadership, China will lead the world sooner or later especially with the focus on technologies and humanity. I think all of the policies executed by President Xi should set a good example for Donald Trump, which Donald Trump will need to learn to make United States great again.”

Bach Ngoc Lien, development expert: “Donald Trump is a controversial character. He often has negative comments about migrants, makes unfavorable policies about climate change, the areas where the U.S. used to be the leader and plays an important role internationally. Human rights, women’s rights are values that the U.S. used to uphold, but I find that these values are fading under Trump’s presidency.”

“During his campaign, President Donald Trump had a slogan `Make America Great Again’ and for his Asian trip, I have a slogan for him: `Make America Friendly Again’ because the U.S has always been a friendly country, being the dream of many people, up until now. I hope Donald Trump will not distance the U.S and isolate it from other countries. I hope he will make the U.S friendly again like it used to be.”

Jeanne Vivar, student: “I don’t like the conservative policies of Trump and obviously it has affected the Filipinos working in America. Ironically, there are a lot of people who are in favor of Donald Trump.”

“In Asia, especially the problem in North Korea is escalating, so my message will be when Trump arrives here in Asia and the Philippines, I hope the tensions will ease instead of him making it worse.”

Lorenzo Nakpil, architect: “My opinion on Trump is mixed. I don’t agree with some people in the West they say he is racist and he wants to build a wall blocking Mexico and he gives immigrants a hard time. He is very conservative in that sense but in a way I respect that. Where I agree with Trump is where he agrees with (Philippine President Rodrigo) Duterte and he supports the Philippines’ war on drugs. He doesn’t buy it that Duterte’s way of stopping drugs is a human rights violation. Our president with the support of Trump, they’re actually doing a good job.”