Since taking office on an "America First" agenda, President Donald Trump has made immigration a policy cornerstone. 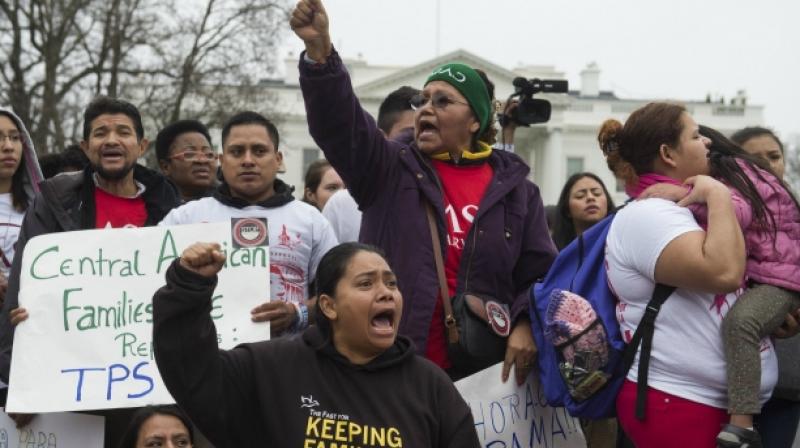 New York: US immigration agents increasingly are detaining unauthorized migrants in or near places once considered "safe" like courthouses and churches, spreading panic among migrants and outrage among activists.

The massive deportations feared under Trump have not materialised -- in fact, deportation numbers are similar to those under former president Barack Obama.

However, ICE agents are now targeting places that used to be respected as sanctuaries of sorts, and have dropped guidelines urging a focus only on serious criminals.

The result: all undocumented migrants can be equally targeted.

One recent high-profile detention was of 'Dreamer' Daniela Vargas, 22, who was born in Argentina and came to the United States as a child.

When ICE agents came to her home to arrest her father and brother, both undocumented migrants, Vargas escaped by hiding in a closet.

The agents however got a second chance on Wednesday after Vargas spoke out against deportations at a press conference in Jackson, in the southern state of Mississippi.

"Disturbing that ICE may have followed her from an immigration news conference," wrote Democratic Senator Ricard Durbin on Twitter, commenting on Vargas' quick arrest.

Vargas had been living in the United States protected by a 2012 decree signed by Obama known as DACA.

The decree authorizes people who were brought into the country as children, and grew up as Americans, to remain and work in the United States.

Vargas, however, let her 'Dreamer' status expire, and was working to save money to pay the renewal fee when ICE agents swooped in and detained her.

According to Vargas's attorneys, ICE agents plan to deport her without a hearing with an immigration judge.

"ICE has no shame," said Yatziri Tovar, another 'Dreamer' who works for the pro-immigrant NGO Make the Road New York.

"This rogue agency has now detained another Dreamer ... apparently, for exercising her First Amendment rights," she said, a reference to the right under the US Constitution to freedom of expression.

Trump has said contradictory things about the DACA program since taking office on January 20.

During the presidential campaign he insisted that he was not ready to give them an "illegal amnesty," but in mid-February he said he will "show great heart" in dealing with 'Dreamers.'

"Donald Trump can try to confuse people as much as he likes by saying nice things about Dreamers," said Tovar, "but the fact is that the agency he oversees is now targeting immigrant youth and tearing them from their families."