This was one of the rare pro-Trump immigration rallies at the White House. 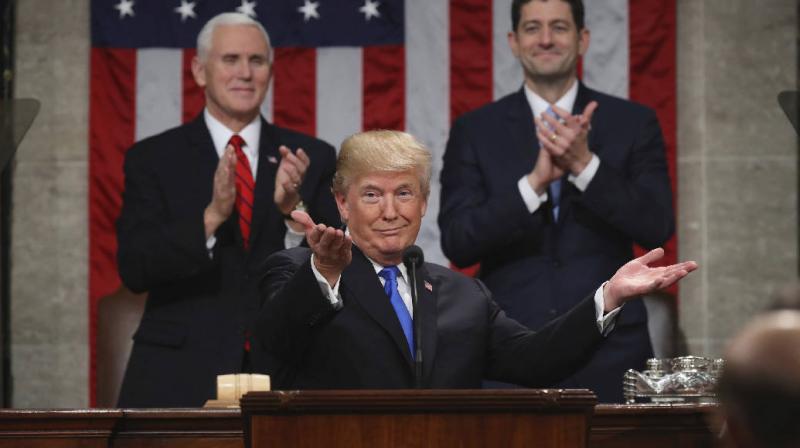 Washington: Several hundred highly-skilled Indians workers, in long agonising green card wait, along with their children and spouses held a rally in front of the White House here in support of President Donald Trump's plan for a merit-based immigration system that among other things ends chain migration and diversity lottery visa.

Flying to the US capital from as far as California, Texas and Chicago and driving several hundred miles from places like Florida, New York and Massachusetts, these highly skilled Indians, living in the US for the past several years and in many cases for more than a decade, urged Trump to end the per country limit on legal permanent residency so as to eliminate the massive Green Card backlog of highly skilled Indians.

"We are looking strictly for a merit-based immigration. That will bring prosperity and fast economic growth of the US," Krishna Bansal, national policy and political director of Republican Hindu Coalition, told the rally of highly skilled Indians, who want to make the US now their permanent home.

"We are with President Trump for taking initiative towards a merit-based immigration system," Bansal said, adding that his group is working with the White House and lawmakers towards a comprehensive immigration bill that should include all these things.

Giving green cards to thousands of highly skilled professionals from India would help them realise their full potential and boost country’s growth and prosperity, he said.

This was one of the rare pro-Trump immigration rallies at the White House.

"Green Card backlogs have been taunting most High Skilled Immigrants who have come to this country for a better life.

The wait expectancy for a Green Card for a High Skilled immigrant from India tends to be somewhat from 12 Years to 70+ Years, when most of the world can get their Green Card in less than 2 years," said Akshita Ramesh, 13, a student of Ronald Regan Middle School in Virginia.

Thanjavur-born, Akshita was one and half year old when she moved to the US along with her father Ramesh Ranathan, who is in the IT profession and had a H-1B visa.

Describing herself as legal H-4 dreamer, Akshita said the current green card waiting period for Indians means that her parents are unlikely to get legal permanent residency for next few decades.

"I have always known I was born in India, and that I was on H4 Visa with my dad having an approved petition to apply for Green Card, but I didn’t know about everything to the full extent.

I didn’t know that being on a H4 could mean that it will be much harder for colleges to accept me, no matter how good my grades are," she said.

"I didn't know that having a H4 until 21 would mean possibly getting pretty much 'kicked out' of the US, the only home I’ve ever known, the land that I felt all the happiness of achievement, and the burning anger of disappointment," Akshita said in a passionate plea.

"And all of this just because I was born in a different country that I barely even lived in?? Don’t you think that’s unfair?" she said, adding that she feels that her dreams would be shattered.

"It sounds scary when I think the day I would turn 21, I would be made to feel a bit like an outcast, or a misfit in the country that I grew up in, how would you feel if you were the only one kid in an area who will be stamped as an alien, a foreigner when you turn 21, even though you’ve lived in the country your whole life?" she asked.

"I urge all lawmakers and the President to hear me and support us in every way you can to solve the backlogs ASAP and guarantee that this problem is solved once and for all, and no single ambitious kid and parent will have to go through the same scenario as me," Akshita said.

According to Republican Hindu Coalition, there are nearly 200,000 children of legal immigrants-in-line from India, who have never broken the law, but who simply age out at 21 and have to go back, because their parents have a 60 year wait to get their green card after it is approved.

"US Economy if it was to grow four per cent per year will need another 400,000 high-skilled workers added to the work force each year. Immigration reform needs to address this issue as well.

The Hindu and Indian community has some anxiety related to Immigration issues," said Anil Sharma a member of the organizing team.

Souptik Mukherjee, another member, said that for the high skilled professional with advanced degrees the green card wait seems to be endless. "Any initiative to move towards a merit-based immigration system is highly laudable."