Trump lashes out at travel ban ruling by 'so-called judge'

The State Department said that up to 60,000 people from the seven targeted countries had their visas canceled as a result of the order. 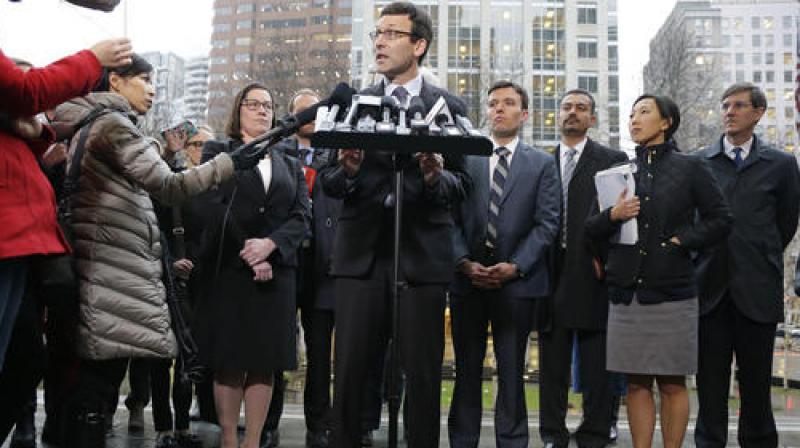 Washington: A federal judge's ruling temporarily lifting a ban on travel to the US from certain countries triggered confusion in airports around the world as airlines began boarding flights bound for America and federal lawyers took steps to reinstate the ban.

As the impact of the ruling took hold, President Donald Trump lashed out on Twitter early Saturday morning, referring to U.S. District Judge James Robart as "this so-called judge" and calling his decree "ridiculous."

"The opinion of this so-called judge, which essentially takes law-enforcement away from our country, is ridiculous and will be overturned," Trump tweeted. "When a country is no longer able to say who can and who cannot come in & out, especially for reasons of safety & security - big trouble!"

The White House said it would try to get a court to reinstate the ban that prompted the State Department to cancel visas for 60,000 or more people from the affected countries, causing widespread confusion at airports when some travelers were detained and others sent back.

An internal email circulated among Homeland Security officials Friday night told employees to immediately comply with the judge's ruling. However, the U.S. embassy in Baghdad said Saturday that they're still awaiting guidance on what to tell Iraqis eager to see if their visa restrictions had changed.

"We don't know what the effect will be, but we're working to get more information," the embassy told The Associated Press in a statement.

A pair of prominent Middle Eastern air carriers announced they would begin allowing passengers from the seven affected countries. Both Qatar Airways and Etihad Airways, national carrier of the United Arab Emirates, said U.S.-bound passengers from those countries with valid visas would be allowed to travel. In Egypt, Cairo airport and airline officials said they have received instructions from the U.S. Customs and Border Protection to suspend President Trump's executive order.

Government-backed Qatar Airways is one of a handful of Mideast airlines operating direct daily flights to multiple American cities. Its U.S. destinations from its Doha hub include New York, Chicago, Los Angeles, Miami and Washington.

The judge's decision was a victory for Washington and Minnesota, which had challenged Trump's directive. Robart in Seattle issued a temporary restraining order, ruling the states had standing. He said they showed their case was likely to succeed.

"The state has met its burden in demonstrating immediate and irreparable injury," Robart said.

The White House has argued that it will make the country safer. Spokesman Sean Spicer released a statement late Friday saying the government "will file an emergency stay of this outrageous order and defend the executive order of the President, which we believe is lawful and appropriate."

Soon after, a revised statement was sent out that removed the word "outrageous."

"The president's order is intended to protect the homeland and he has the constitutional authority and responsibility to protect the American people," the statement said.

A State Department official, speaking on condition of anonymity because the matter is under litigation, said Friday: "We are working closely with the Department of Homeland Security and our legal teams to determine how this affects our operations. We will announce any changes affecting travelers to the United States as soon as that information is available."

In their arguments to the court, Washington state and Minnesota said the temporary ban on entry for people from Iran, Iraq, Syria, Sudan, Somalia, Libya and Yemen and the global suspension of the U.S. refugee program significantly harms residents and effectively mandates discrimination.

After the ruling, Washington State Attorney General Bob Ferguson said people from the affected countries can now apply for entry to the U.S.

"Judge Robart's decision, effective immediately ... puts a halt to President Trump's unconstitutional and unlawful executive order," Ferguson said. "The law is a powerful thing - it has the ability to hold everybody accountable to it, and that includes the president of the United States."

The judge's ruling could be appealed the 9th U.S. Circuit Court of Appeals.

Federal attorneys had argued that Congress gave the president authority to make decisions on national security and immigrant entry.

But in his written order released late Friday, Robart said it's not the court's job to "create policy or judge the wisdom of any particular policy promoted by the other two branches," but rather, to make sure that actions taken by the executive or legislative branches "comports with our country's laws."

Court challenges of the ban have been filed nationwide from states and advocacy groups. Washington Solicitor General Noah Purcell said his state's focus is the way the president's order targets Islam.

Trump has called for a ban on Muslims entering the country, and the travel ban was an effort to make good on that campaign promise, Purcell told the judge.

"Do you see a distinction between campaign statements and the executive order?" Robart asked. "I think it's a bit of a reach to say the president is anti-Muslim based on what he said in New Hampshire in June."

Purcell said there is an "overwhelming amount of evidence" to show the order is unconstitutionally directed at the Muslim religion.

The judge then questioned the federal government's lawyer, Michelle Bennett, about Trump's rationale.

Robart, an appointee of President George W. Bush, asked if there had been any terrorist attacks since 9/11 by people from the seven counties listed in Trump's order. Bennett said she didn't know.

"The answer is none," Robart said. "You're here arguing we have to protect from these individuals from these countries, and there's no support for that."

Bennett argued that the states can't sue on behalf of citizens, and the states have failed to show the order is causing irreparable harm.

Robart disagreed, and rejected a request from Bennett for an immediate stay of his order.

The State Department clarified that the higher figure includes diplomatic and other visas that were actually exempted from the travel ban, as well as expired visas.

Ferguson, a Democrat, said the order is harming residents, businesses and the state's education system. Washington-based businesses Amazon, Expedia and Microsoft support the challenge, saying the ban is hurting their operations as well.