'We were not aware of this messaging and would prefer our trademark not be misappropriated for political purposes,' HBO said. 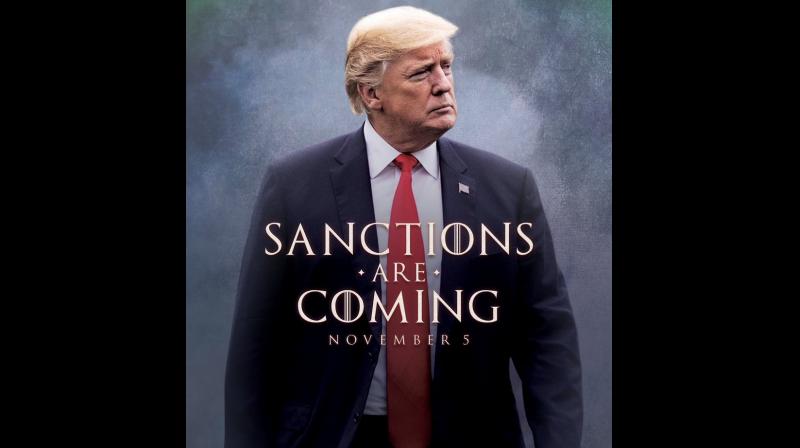 'SANCTIONS ARE COMING,' reads the mock movie poster. Each 'O' is crossed by vertical lines, like in the 'Game of Thrones' logo and the words are superimposed on a picture of the president striding out of a foggy background. (Photo: Twitter | @realDonaldTrump)

Washington: "Game of Thrones" fans are primed for the final season, but starring Donald Trump? Well not quite, though the president had a laugh at Iran's expense Friday by posing in a GoT-style picture.

Each "O" in the fictional Trump title is crossed by vertical lines, just like in the "Game of Thrones" logo.

The words are superimposed on a picture of the president striding out of a foggy background or possibly the smoking ruins of a diplomatic battlefield.

Trump was referring to a host of new sanctions set to be imposed on Iran by the United States, after Washington ditched an agreement reached under Barack Obama's administration to lift sanctions in exchange for controls over Tehran's nuclear programs.

The punitive measures were announced on Friday but will take effect from Monday.

As for HBO, it isn't amused by Trump's fantasy poster.

"We were not aware of this messaging and would prefer our trademark not be misappropriated for political purposes," said HBO in a statement to The Hollywood Reporter.

Trump, who followed his real estate career with a spell as a reality TV host, is no stranger to self-promotion, telling rallies that by every metric imaginable he is enjoying unprecedented success.

"The greatest movement in the history of our country," he calls the populist revolt that saw him beat Hillary Clinton in 2016 by a relatively tight margin -- although he calls it "a landslide."

Tags: donald trump, game of thrones, us sanctions on iran, sanctions are coming