'So what?' says Bolsonaro on 5000 corona deaths in Brazil 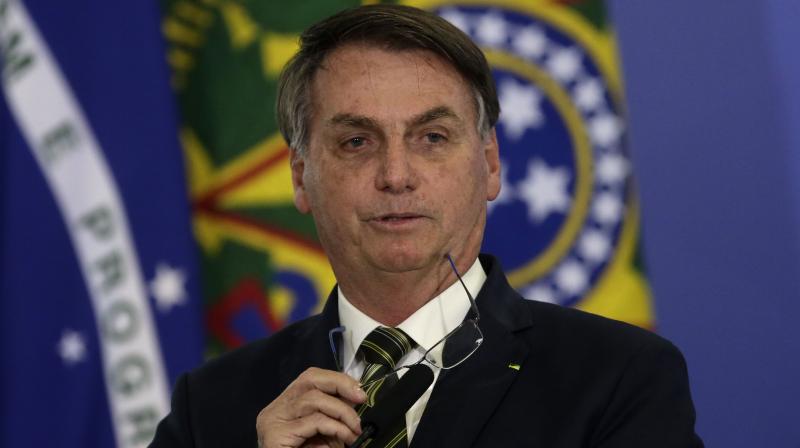 Rio De Janeiro: Rarely have two words ignited such a firestorm of controversy.

"So what?" said Brazilian president Jair Bolsonaro on Tuesday when a journalist asked him about the fact that more than 5,000 Brazilians had died of the coronavirus.

The far-right leader's off-the-cuff comment has been sparking anger ever since, with governors, politicians, healthcare professionals and media figures all weighing in to express their outrage at his lack of empathy.

Bolsonaro is no stranger to controversy. But his latest remark sparked such a fury because Brazil is facing a seemingly uncontrollable outbreak of the disease and is still several weeks away from the peak of the pandemic, with a death toll that threatens to surpass even the most dire predictions.

There have been more than 91,000 officially confirmed cases so far but scientists warn the real figure could be 15 to 20 times higher.

With a death toll that has already topped 6,300, the giant South American country is facing as grim a scenario as Italy or the United States.

"So what? I'm sorry. What do you want me to do?" Bolsonaro said Tuesday when questioned about his country passing the 5,000-death mark, more than China. He joked that even though his middle name is Messias, or Messiah, "I don't do miracles."

With his own state on the verge of a public health meltdown, Witzel slammed the president for "being ironic about the deaths" rather than "being a leader at such a moment."

"Do your job," he said on Twitter Wednesday, the day when the pro-gun president was training at a target range, far from the woes of Brazil's 210 million citizens.

Joao Doria, governor of Sao Paulo state which is also on the frontlines of the battle against the coronavirus with more than 2,500 deaths already, replied furiously to Bolsonaro in the capital Brasilia.

"Get out of your Brasilia bubble," he retorted, urging Bolsonaro to visit hospitals "in this country which is crying for its dead and infected."

Unlike many other heads of state, the Brazilian leader has not been seen in any hospitals nor has he expressed much solidarity with victims of the disease, bereaved families or healthcare staff who have condemned the lack of ventilators or beds.

The head of the doctors' union in Sao Paulo, Eder Gatti, called on television for "a more serious attitude from the president of the republic."

Bolsonaro "shows very little sensitivity to the tragedies that the families of those directly affected by the pandemic are going through," said Lucio Renno, director of the Institute of Political Science at Brasilia University.

"His style is the iron fist, to be hard rather than to show solidarity or empathy," he told AFP.

It is a style that inevitably draws comparison with Bolsonaro's own role model, US President Donald Trump.

That type of reaction is "shocking for a large part of the population" and "reinforces the idea for a good part of the elites and for the Brazilian people that he is not fit to govern," Renno said.

Miriam Leitao, an op-ed writer at the daily O Globo, wrote on Thursday that with his "So what?" Bolsonaro had "renounced the presidency."

"Anyone who shows such contempt for his own people can no longer be president," she wrote.

In a tactic he has honed since becoming president, Bolsonaro quickly went on the offensive in the face of criticism from the governors and mayors, whom the Supreme Court has granted the power to call the shots in the fight against the pandemic.

"Ask Joao Doria or (Bruno) Covas [the mayor of Sao Paulo] why people continue to die even when they have taken such restrictive measures," said the president.

"They are the ones who should have the answers, you can't pin that on me."

Nevertheless the press on Friday blamed the spike in infections and death on Bolsonaro, who has encouraged people to go out to work to prevent an economic crash and whose most fervent supporters have taken to the streets to protest against lockdown orders.

Bolsonaro's "So what?" has "underscored how little importance he has attached to the situation," said political analyst Andre Pereira Cesar.

"If the president does not assume a wartime leadership stance against the virus he will be judged harshly -- by history and by voters," he warned.