The American President’s tough message to Pakistan was welcomed by the BJP which called it a success of Prime Minister Narendra Modi’s diplomacy.

New Delhi/Washington: In a shock to Pakistan on New Year’s Day and good news for India, US President Donald Trump on Monday attacked Pakistan for giving nothing to the US but “lies and deceit” in return for $33 billion aid and said Islamabad has provided “safe haven” to terrorists.

“The United States has foolishly given Pakistan more than 33 billion dollars in aid over the last 15 years, and they have given us nothing but lies & deceit, thinking of our leaders as fools,” Mr Trump said in a strongly-worded tweet.

“They give safe haven to the terrorists we hunt in Afghanistan, with little help. No more!” Mr Trump said in his first tweet of the year.

Both India and Afghanistan, which have been affected by Pakistan’s state-sponsored terrorism, have left no stone unturned to draw global attention to the devious role played by the Pakistan Army and ISI. These efforts have received a big boost from the Trump administration which appears intent on hauling up Pakistan over continuing  support for terrorism.

“We will respond to President Trump’s tweet shortly inshallah... Will let the world know the truth… Difference between facts & fiction…,” Mr Asif tweeted.

The American President’s tough message to Pakistan was welcomed by the BJP which called it a success of Prime Minister Narendra Modi’s diplomacy. 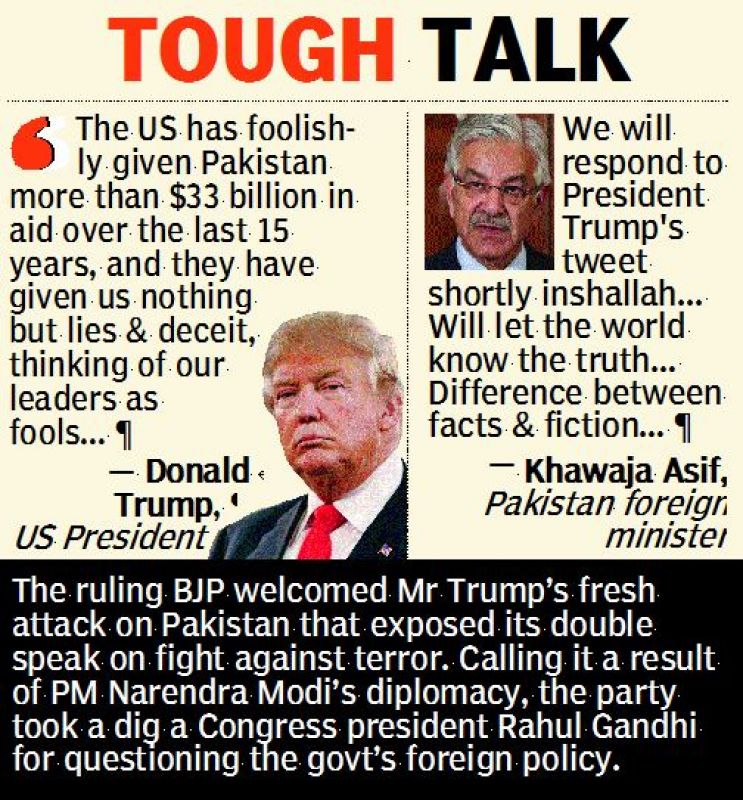 “Congrats to POTUS for calling Terroristan’s bluff & signalling resolve to end Pak’s deceit. Dear RahulG, here are results of diplomacy of PM @narendramodi ji. When will you see Pak “drama” instead of targeting Indian army. Are you rushing Aiyers to hug and console Pak over the snub? (sic),” BJP spokesperson G.V.L. Narasimha Rao said in a tweet.

The US president’s remarks come days after the American media reported that the US is considering withholding $225 million in aid to Pakistan, reflecting its dissatisfaction with the latter’s reluctance in the war against terrorism.

In November, the US had strongly condemned release of the Mumbai attacks mastermind Hafiz Saeed by Pakistan and had demanded his immediate re-arrest and prosecution, warning that there would be “repercussions” for bilateral ties if Islamabad fails to take “decisive action” against the JuD chief. Saeed, who carries a $10 million American bounty on his head for terror activities, walked free after the Pakistan government decided against detaining him further in any other case.

In his new South Asia Policy in August, President Trump had called for tougher measure against Pakistan if it fails to cooperate with the US in its fight against terrorism.

“We can no longer be silent about Pakistan’s safe havens for terrorist organisations, the Taliban, and other groups that pose a threat to the region and beyond. Pakistan has much to gain from partnering with our effort in Afghanistan. It has much to lose by continuing to harbour criminals and terrorists,” Mr Trump had said in his South Asia Policy speech.

“We have been paying Pakistan billions and billions of dollars at the same time they are housing the very terrorists that we are fighting. But that will have to change, and that will change immediately,” President Trump had earlier said.

“No partnership can survive a country’s harbouring of militants and terrorists who target US service members and officials. It is time for Pakistan to demonstrate its commitment to civilisation, order and peace,” he had said.

In a surprise visit to Afghanistan before Christmas, US vice-president Mike Pence had issued a stern warning to Pakistan, for which using non-state actors against its two neighbours — India and Afghanistan — has been part of its national security policy. “For too long Pakistan has provided safe haven to the Taliban and many terrorist organisations, but those days are over,” Mr Pence told American troops at the Bagram airbase in Afghanistan where he made an unannounced trip on December 21. “President Trump has put Pakistan on notice,” he had said.