A majority of British people now believe the dark shadow of fascism is spreading across the US. 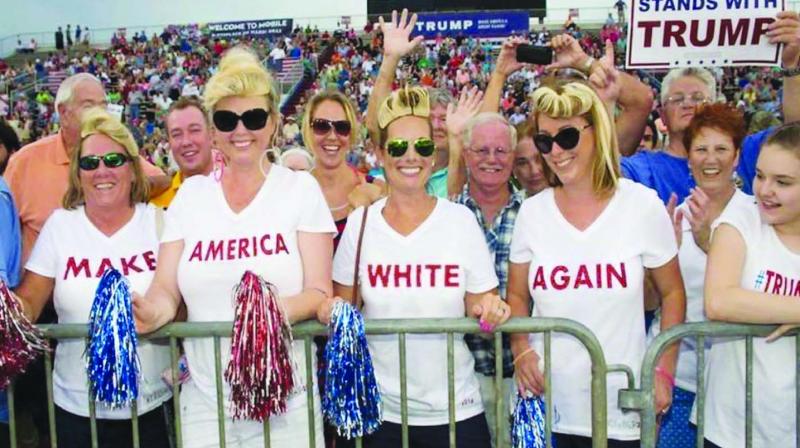 A file photo of supporters of US President-elect Donald Trump attending an election rally.

London: The British public is fearful of the rise of fascism around the world in the wake of Donald Trump’s election victory in the US and the Brexit referendum in the UK, according to a new survey released Sunday.

The study by BMG Research for The Independent newspaper also showed that most people think the number of individuals holding fascist views is increasing in the United Kingdom and on the continent as well.

A majority of British people now believe the dark shadow of fascism is spreading across the United States following Mr Trump’s shock victory in November 2016, it said.

BMG pollsters asked participants whether they thought “the number of people with fascist views in the United States of America is increasing, decreasing or about the same?”

When the same question was put in relation to the UK, almost half, some 46 per cent, said they believe the number of people with fascist views in Britain is growing, with three per cent saying it is decreasing and around a third believing it is about the same.

Looking at Europe, the figures were broadly similar, with 48 per cent saying they believe the number of people with fascist views is growing.

BMG Research Director Dr Michael Turner said: “With age comes experience, which may explain why our polling shows that it’s older Britons who are most likely to feel that fascist views are on the rise, particularly in Europe.”

He added: “Remainers are much more likely than Leavers to feel that fascist views are increasing at home. Around six in 10, 59 per cent, of those who voted to stay in the EU feel that fascism is on the rise in the UK, whereas just four in 10 Leavers, 41 per cent, feel the same.”

However, both Remainers and Leavers are much more united on the view that fascism is rising on the continent, with some 57 per cent of Remainers and 52 per cent of Leavers saying so in our latest poll for The Independent.

In 2017 elections in France, Germany and Holland are expected to see far-right parties make stronger bids for power than at any moment in recent history.