Harvey has brought the heaviest rainfall in US history, soaking Texas with more than 52 inches since it first made landfall last Friday. 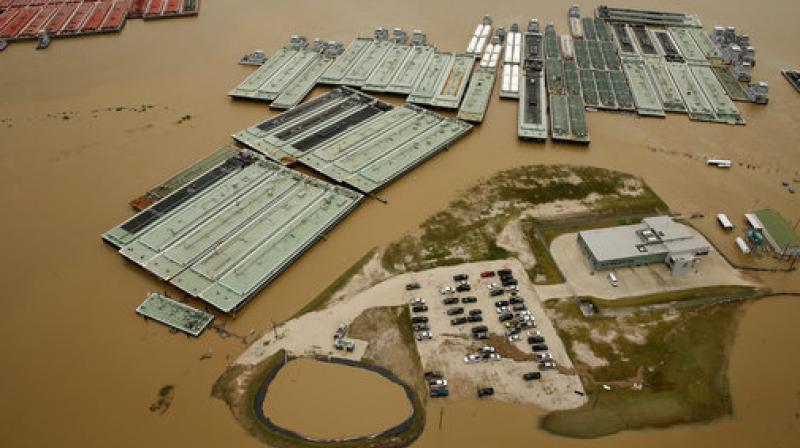 Barges are secured by tugboats in the flood-swollen Burnet Bay along the Houston Ship Channel in Houston. (Photo: AP)

Washington: US President Donald Trump will donate USD 1 million of his personal money for flood relief operations in Texas and Louisiana which have been hit by the catastrophic Hurricane Harvey, the White House has said.

Harvey has brought the heaviest rainfall in US history, soaking Texas with more than 52 inches since it first made landfall last Friday. At least 38 people have been killed as a result of the devastating floods and that number was climbing as water receded.

"He will pledge, proudly, a million dollars of his own personal money to help the people of both Texas and Louisiana," White House Press Secretary Sarah Sanders said. Sanders said Trump is looking for suggestions on best and most effective way to help and provide aid. "I had a chance to speak directly with the president earlier, and I'm happy to tell you that he would like to join in the efforts that a lot of the people that we've seen across this country do, and he's pledging a million dollars of personal money to the fund," she said.

Trump travelled to Texas on Tuesday for a first-hand assessment of the situation on the ground. He would return to the Houston area over the weekend, she said. "It looks like around about 100,000 affected homes. That's a big number. We're going to have 100,000 affected homes, all with different degrees of insurance; some with flood insurance, some under insured, some uninsured," he said.

According to Bossert, the disaster relief fund had USD 3.2 billion on hand when Harvey hit last Friday. The Trump Administration would ask Congress for "a responsible supplemental request" for more funds. "We'll make that request shortly. We'll make that request based on the information that we have now. What we'll do then is come back later for a second supplemental request when we have additional information that would make a more informed total for Congress to consider," he said.

Accuweather estimated Harvey's cost at USD 160 billion, making it the costliest natural disaster in US history. AccuWeather president Joel Myers called Harvey a '1000 year storm' and said parts of Houston will be uninhabitable for weeks or months.

More than 30,000 people took refuge 200 shelters, about 1,800 evacuees have been moved to hotels and other longer-term housing options, said Brock Long, Administrator of the Federal Emergency Management Agency.