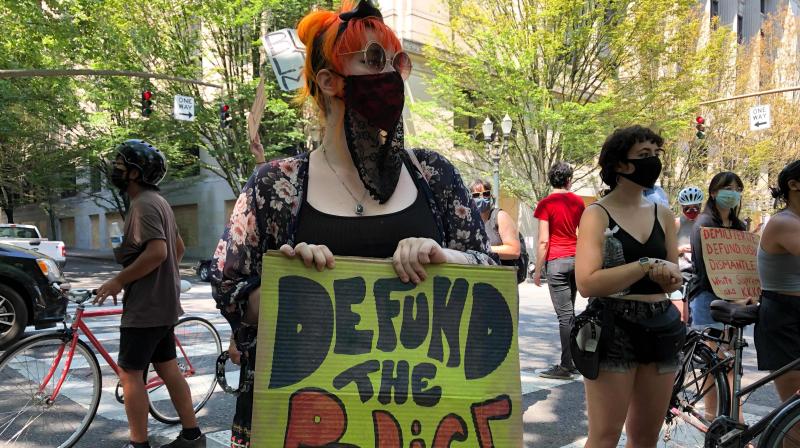 Portland: Portland had its first day without tear gas in weeks after state police took over from federal agents guarding a courthouse that had become a battleground for agitators and tactical units.

Agents withdrew under a deal between Oregon’s governor and U.S. officials to end a deployment that saw escalating violence and a clash between Republican President Donald Trump and Democratic mayors over the use of federal force in their cities.

Some people again tried to light fires at the courthouse on Friday but other protesters put them out, as a few hundred people demonstrated until around 3 a.m., Portland police said in a statement, adding that there were no arrests.

“Now we have a partnership, the state is doing its job, we’re doing our job,” Scott said in an interview.

Trump sent federal forces to confront what he called a “beehive of terrorists” who had lit fires and broken windows at the Portland courthouse since late May, when protests against police violence began after the death of George Floyd in Minneapolis.

Democratic mayors said the deployment escalated tensions at largely peaceful anti-racism protests and was political theater for Trump’s “law and order” campaign ahead of the Nov.3 presidential election.

Activists like Rashelle Chase hoped they could return to efforts to reform Portland’s police, who clashed with protesters before the federal surge in early July.

“Violence breeds violence when you have federal agents using aggression against a vast majority of people who are not violent,” said Chase, 39, a Black mother and early childhood educator .

“We’re the opposite of defund,” Trump said at a White House event.

A DHS spokesman said Wolf ordered his agency to stop collecting information on journalists covering the protests after the Washington Post reported the practice.

Asked if the deployment was part of wider operations against anarchists and anti-fascists, Scott said there were “significant concerns and threats” against law enforcement that his agency had learned more about through events in Portland.

He said agents there sometimes faced “chaos” in which it was difficult to distinguish between “legitimate protesters” and “imposters,” citing an example of someone with “press” written on their chest videoing at one moment and assaulting an officer the next.

“We would not, nor would we ever try to systematically track or monitor legitimate journalists or protesters,” he said when asked about intelligence gathering. “It’s a very, very grey area when that same person starts attacking you.”