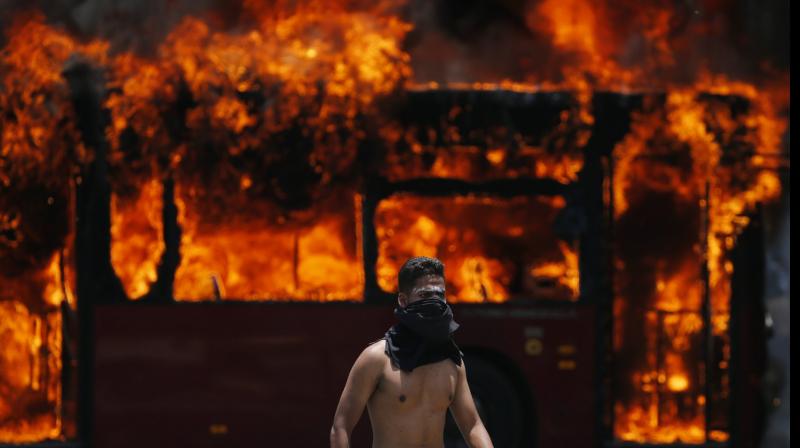 Rioters later blocked the highway with a bus and set it on fire. (Photo: AP)

Caracas: Demonstrators clashed with police on the streets of the Venezuelan capital on Tuesday, spurred by opposition leader Juan Guaido's call on the military to rise up against President Nicolas Maduro -- who said he had defeated an attempted coup.

On Tuesday evening, Maduro declared victory over the uprising -- congratulating the armed forces for having "defeated this small group that intended to spread violence through putschist skirmishes."

"This will not go unpunished," Maduro said in an address broadcast on television and the radio. "(Prosecutors) will launch criminal prosecutions for the serious crimes that have been committed against the constitution, the rule of law and the right to peace."

Guaido had been immediately backed the United States, where President Donald Trump said in a tweet said that Washington was standing behind the Venezuelan people and their "freedom."

He rallied his supporters with an early morning video message that showed him -- for the first time -- with armed troops he said had heeded months of urging to join his campaign to oust Maduro.

The 35-year-old National Assembly leader was filmed outside the La Carlota air base, where he asked the armed forces inside to join him.

Guaido claimed the move was the "beginning of the end" of Maduro's regime, and there was "no turning back." He later called for a fresh round of protests on Wednesday, in another video message.

Thousands of opposition supporters flocked onto a highway near the air base, many waving Venezuelan flags, but they were met with gunfire and tear-gas fired by soldiers at the compound's perimeter.

Soldiers backing Guaido wore blue armbands to demonstrate their allegiance to the opposition leader -- recognized as interim president by more than 50 countries -- but there appeared to be few of them.

Brazil said later a number of Venezuelan troops had sought asylum at its Caracas embassy. Brazilian media put that number at 25.

But Maduro had called on his forces to show "nerves of steel" and troops in riot gear, backed by armored vehicles and water tankers, lined up against the demonstrators.

Several vehicles plowed into the crowd, injuring some of the protesters. Rioters later blocked the highway with a bus and set it on fire.

He later said an army colonel had received a bullet wound during the clashes in Caracas. Health officials said 69 people were injured, including two from bullet wounds.

The US, meanwhile, called on the military to protect the people and support "legitimate institutions" including the opposition-controlled National Assembly.

US Secretary of State Mike Pompeo told CNN he believed Maduro was ready to flee the country to ally Cuba before he was dissuaded by Russia -- a claim Maduro later refuted.

Trump threatened a "full and complete embargo" and tougher sanctions against Cuba if it doesn't end military support for Venezuela.

Pro- and anti-Maduro demonstrations were held outside the Venezuelan embassies in several Latin American and European capitals.

The government suspended broadcasts from BBC, CNN International and a Caracas radio station, local media and the National Union of Press Workers said.

In his video, Guaido said the "definitive phase" had begun in his attempt to oust Maduro -- who has presided over a catastrophic economic implosion since taking over from his late mentor Hugo Chavez in 2013.

The opposition plans to hold a massive May Day protest in Caracas, where Maduro will also lead a rival rally.

Tensions in Venezuela have been ratcheted up to a critical level this year, after Guaido announced on January 23 that he was the acting president under the constitution. He said Maduro had been fraudulently re-elected last year.