World   Americas  01 May 2017  DisCourse: Are we heading to World War III?
World, Americas

DisCourse: Are we heading to World War III?

The fear of World War III is never far away. 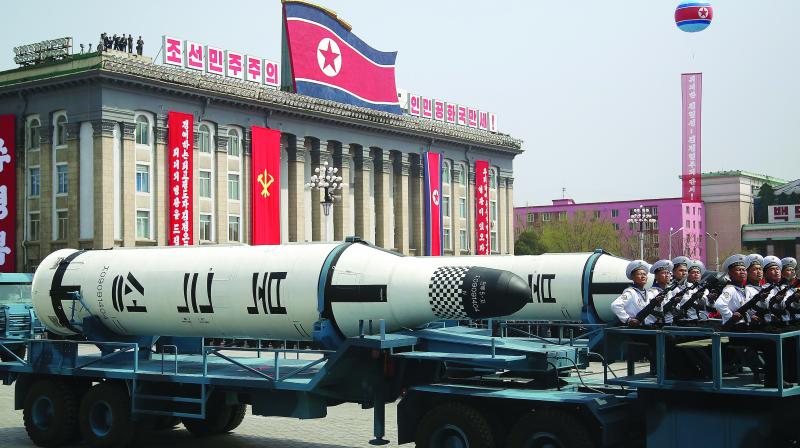 This undated picture released by North Korea’s official Korean Central News Agency on April 26 shows the demonstration of the armaments with the Korean People’s Army. North Korea staged its largest-ever military drill to mark the founding of the country's army, amid rising tensions with the West.

President Donald Trump of the United States came out all guns blazing and, in the course of one short week in April, stamped the early contours of his Administration's foreign policy on the geo-strategic landscape. On April 6, 2017, he ordered the US Navy to fire on al-Shayrat airfield in Syria. 59 Tomahawk missiles cruise missiles were launched from ships in the Mediterranean Sea as retribution for the use of Sarin gas, a chemical weapon, by Bashar al-Assad against his own people in Idlib two days before.
On April 8, 2017, the US Navy announced that a task force led by the aircraft carrier Carl Vinson was being despatched to the Korean Peninsula.

Apparently the aim was to deter North Korea from carrying out another nuclear test and, possibly, a missile test. Mr Trump said, "We are sending an armada. Very powerful." That the aircraft carrier was sailing towards Indonesia and will take a long time to get to the Korean Peninsula is another matter.

Later, Mr Mike Pence, the US Vice President, said during a visit to Seoul that the US stood "shoulder to shoulder" with its ally South Korea. He declared that the era of US "strategic patience" in dealing with Pyongyang was over. It was also leaked out that the President was considering a pre-emptive strike on North Korea.

On April 13, 2017, the US dropped the ‘Mother of All Bombs’ on a cave and tunnel complex in Afghanistan believed to be used by the ISIS's Khorasan module. The 10-tonne MOAB (Massive Ordnance Air Blast) is the largest non-nuclear weapon anywhere in the world. Dozens of ISIS fighters are reported to have been killed in the attack. With these three moves, Mr Trump has graduated rather rapidly from the isolationism he had advocated during the campaign to global power projection.

America's vigorous military moves were being watched closely by President Vladimir Putin and his team. They were like a red rag to a bull. Moscow was taken by complete surprise, but reacted angrily and quickly. Besides condemning the missile strikes against Syria and calling them an act of “aggression against a sovereign nation”, Russia called an emergency meeting of the UN Security Council. Mr Putin ordered the Russian Navy’s frigate Admiral Grigorovich to move to the Mediterranean forthwith. He also suspended Russia’s memorandum of understanding on flight safety with the US for operations in Syria

Elsewhere in the world too the jockeying for power and influence continues unabated. In West Asia, the completion of the recapture of Mosul by Iraqi forces, supported by the US and its allies, is imminent. Though it will be the second successive major setback for the ISIS militia after the fall of Mosul in December 2016 to the Syrian army, backed by Russia and Iran, the Islamic State will not wither away anytime soon.

Since Russia annexed Crimea, a Ukrainian province, in March 2014, almost 10,000 people have been killed in fighting between government forces and Russia-backed rebels in eastern Ukraine. The Russian move came soon after Poland and Romania approved the deployment of US ballistic missile defence (BMD) systems on their soil.
The deployment was ostensibly intended to intercept Iranian missiles but was vehemently opposed by Russia. The region has become a potential flashpoint.

The single greatest cause of instability in South Asia is the long-drawn conflict in the Af-Pak region. Tensions between India and Pakistan show no signs of abating as the Pakistan army and the ISI continue to wage war against India by asymmetric means and the Indian government’s response grows more vigorous. By undertaking to build the China-Pakistan Economic Corridor (CPEC) through the disputed Gilgit-Baltistan area, part of J&K under illegal Pakistani occupation, China has opted to fish in troubled waters. Another hotspot is the war being fought with Yemen by its neighbours, mostly through proxies.

In the South China Sea, where the disputed Spratly and Paracel groups of islands are located, China continues its single-minded pursuit to extend its administrative control up to the limits of the 'nine-dash line'. China's coast guard constantly patrols the Luconia Shoals off the coast of Malaysia’s Sarawak State on the island of Borneo. President Rodrigo Duterte of the Philippines has ordered the military to occupy and fortify all Philippine-held islands to assert his country’s claims and oppose China’s moves. And, at the beginning of April, Indonesian authorities destroyed 81 foreign ships that had been seized for fishing illegally in the country’s waters.

The polycentric new world order, which had begun to emerge gradually from the ashes of the Cold War, after a brief ‘unipolar’ moment, has begun to fray at the edges. The primary cause of strategic uncertainty is the growing friction and distrust among the major powers. Other causes include the triumphant rise of strident right wing political parties, dilution in the forces of globalisation and free market economies and the world's inability to comprehensively defeat the Islamic State. The arc of instability is expected to gradually spread to new areas.

To come back to Korean Peninsula, China would not like to see conflict break out and the US increase its forces in its neighbourhood again. China has considerable influence over North Korea, but if the country is pushed into a corner, Kim Jong Un's actions would be hard to predict.

Even as President Trump was preparing to call the leaders of China and Japan over the weekend to discuss measures to reduce tensions, North Korea threatened to sink the USS Carl Vinson, the aircraft carrier leading the US task force. While the rhetoric may yet be ratcheted up a few notches by both sides, the probability of actual conflict breaking out remains low as neither side one will gain.

North Korea is an unstable nuclear-armed nation ruled by a ruthless tyrant. In case Mr Trump launches an air-to-ground and missile attack on North Korea, Kim Jong Un can be expected to retaliate with a vengeance.
While some of his retaliatory strikes will be aimed at the Carl Vinson task force, the bulk of the counter effort will be directed against South Korean forces and the people. Seoul is within the range of North Korean artillery. An hour's shelling would cause a blood bath.

In case hostilities escalate and North Korea with its large army threatens to overrun the South, Trump is likely to consider the use of nuclear weapons. Many of his statements as a candidate had not inspired confidence. Joe Scarborough of MSNBC had reported that Trump had repeatedly asked an international foreign policy expert (whom he did not name) why the US could not use nuclear weapons. The report was denied by the Trump campaign.

In an interview with the New York Times in March 2016, Trump had said, "Japan and South Korea might need to obtain their own nuclear arsenal to protect themselves from North Korea and China if the US is unable to defend them…”
While campaigning for Hillary Clinton, President Obama said that a man who could be provoked by a Tweet ought not to have his finger on the nuclear button. But, after becoming President, Mr Trump has acted with maturity and responsibility.
Conflict between nation states causes colossal damage and has seldom resolved disputes. The only direct beneficiary of conflict is the military-industrial complex. If large-scale conflict is to be avoided, the world's leading powers will have to work together in a concerted manner. Statesmanship of a very high order is called for.

1. Syria & Iraq |
An estimated half a million people have been killed, 12 million uprooted in fighting involving different factions and groups.

2.Turkey |
In addition to spillover from the wars in Syria and Iraq, Turkey is in a spiralling conflict with the PKK. At least 2,500 militants, security forces and civilians have been killed and 3,50,000 civilians displaced. The events after the referendum arming Erdogan with sweeping powers add another dimension.

3.Yemen | A huge human catastrophe in one of the poorest parts of the Arab world. Millions of people are now on the brink of famine. Atleast 4,000 civilians have been killed, mostly in Saudi Arabia-led coalition airstrikes. Al-Qaeda and other militant groups are thought to be having a free run here.

4. Afghanistan |
The Taliban are gaining ground. The Haqqani network is responsible for attacks in major cities and the Islamic State has claimed attacks on Shias. The US dropped the ‘Mother of all Bombs’.

5. Ukraine | Three years of war and 10,000 deaths later, Russian intervention defines all aspects of political life in Ukraine. Trump’s professed admiration for Russian President Vladimir Putin scares Kiev, as do rumours that the United States may decide to scrap sanctions against Russia although the latter annexed Crimea in 2014.

Doomsday Clock ticking down
A statement from the Science and Security Board which runs the Doomsday Clock reads, “The probability of global catastrophe is very high, and the actions needed to reduce the risks of disaster must be taken very soon.” For the last two years, the minute hand of the Doomsday Clock stayed set at three minutes before the hour, the closest it had been to midnight since the early 1980s.

Chances of accidental war
Missiles with millimetre precision and hypersonic speed mean that for most countries the only viable defence is a pre-emptive strike — get in the first blow.  Nuclear armaments are sufficient to destroy the whole Earth several thousand times over.