Trump's order on immigration: Is it legal?

The declaration triggered an international uproar as immigrants and legal US residents were ensnared in a web of detention in airports. 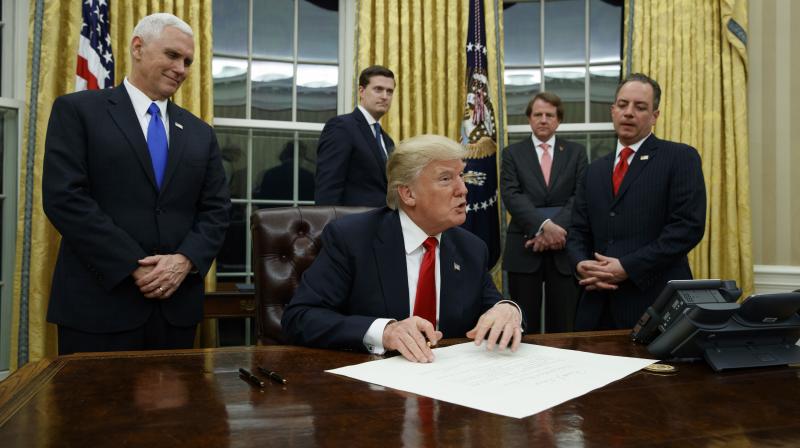 The declaration triggered an international uproar as more than 100 immigrants, refugees, and even legal permanent US residents were ensnared in a web of detention in several airports.

Some were turned away and put on departing flights, but many were released into the United States, often with the help of US attorneys, after a delay.

Supporters argue it is merely a temporary measure similar to restrictions put in place by Trump's predecessor Barack Obama in 2011, and aimed at boosting national security at a time of heightened global concern over terrorism.

But is it legal? We take a look at both sides.

'Not a ban' on Muslims

The US Constitution's First Amendment protects the right to freedom of religion, speech and the press, a section now known as "the establishment clause."

Supporters insist Trump's "Executive Order Protecting the Nation from Foreign Terrorist Entry into the United States" abides by such a rule.

"This is not -- I repeat, not -- a ban on Muslims," Homeland Security Secretary John Kelly said Tuesday, adding that religious liberty is a "fundamental treasured value."

The order indeed does not explicitly ban Muslims, something Jonathan Turley, a law professor at George Washington University, noted in defense of the order.

"The law favors Trump on the constitutionality," he told MSNBC.

"On the statutory side, there's an argument under a 1965 law," he added, referring to the Immigration and Nationality Act that prohibits discrimination based on religion or national origin.

But experts also say that law focused on removing the skewing of immigration quotas, not national security priorities.

Benjamin Wittes, editor-in-chief of Lawfare, said on his national security blog that despite the "malevolent" nature of the order for its potential to adversely impact so many innocent lives, it passes legal muster.

"The president's power over refugee admissions is vast," Wittes wrote. "His power to restrict visa issuances and entry of aliens to the United States is almost as wide."

But round one of the constitutional fight nonetheless has gone to the order's opponents.

Following immediate legal challenges by the American Civil Liberties Union, judges barred any deportations of legal refugees already in the country, including at airports, or of immigrants with legal visas from the seven nations listed in the order.

District Judge Ann Donnelly, in issuing a stay, wrote that the order "violates (petitioners') rights to due process and equal protection guaranteed by the US Constitution."

Michael Price, counsel of the Liberty and National Security program at the Brennan Center for Justice, said that many of the arguments about a president's plenary power over immigration are "misplaced."

He said there are two related questions -- whether the president has statutory authority and whether he has constitutional authority -- and that Trump is wrong on both counts.

Congress has repeatedly enacted laws to prevent the president from excluding people based on ideology, he said, and Section 212 of the current immigration law code places clear prohibitions excluding immigrants based on their beliefs.

"The president is violating that provision," Price told AFP in an interview.

On the broader issue of constitutionality, courts have warranted that the president has broad powers, but that if he was acting "based on religious animus or discriminatory intent, then that constitutional analysis would change."

Several Republican lawmakers have argued that Trump is merely taking steps to keep Americans safe, but Price called that a "fig leaf" on a larger problem.

Trump's comments on the campaign trail calling for a ban on Muslims, and statements by his supporters including former New York mayor Rudy Giuliani saying Trump sought a Muslim ban and wanted to do it legally, "give lie to that argument," Price said.

While the order makes no mention of Islam or Muslims, it prioritizes "minority religion" refugee claims when immigration resumes from Iran, Iraq, Libya, Somalia, Sudan, Syria and Yemen.

Such an appearance of prioritizing Christian immigrants adds to the argument that Trump is discriminating, Price said.

"You are going to see a lot of additional legal challenges to this executive order in the coming days," he said.