Jerusalem's status lies at the core of the Israeli-Palestinian conflict, and Trump's move was widely perceived as siding with Israel. 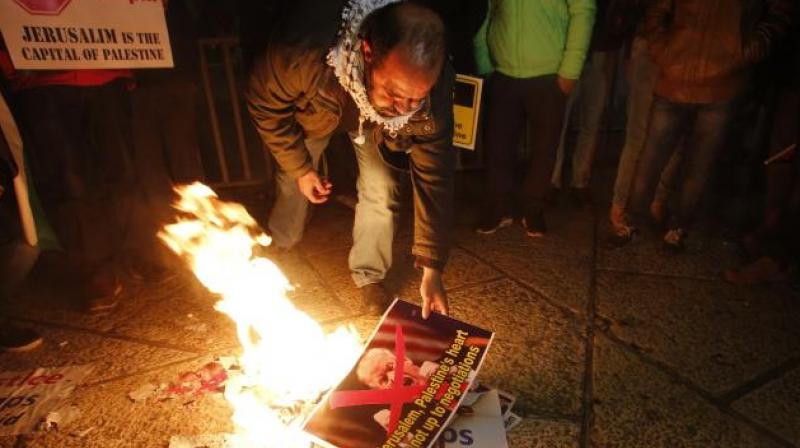 The resolution said the ministers would meet again within a month and held out the possibility that an emergency Arab summit would be held in Jordan to discuss Jerusalem. (Photo: AFP)

Cairo: Arab foreign ministers Sunday demanded that the United States rescind President Donald Trump's decision to recognise Jerusalem as Israel's capital, calling it a "grave" development that puts Washington on the same side as "occupation" and the violation of international law.

In a resolution long on rhetoric but short on concrete actions, the ministers also called for the UN Security Council to adopt a resolution condemning Trump's decision, but acknowledged that Washington would most likely veto it.

If the US vetoes the resolution, the Arabs would seek a similar resolution in the UN General Assembly, Palestinian Foreign Minister Riyad Al-Maliki told a pre-dawn news conference in Cairo.

A two-page resolution adopted by the emergency meeting, which began Saturday night, did not include any punitive actions against the United States, like a call for a boycott of American products or suspending or downgrading ties with Washington.

It also appeared to fall short of matching the anger felt by Palestinians in the Gaza Strip and West Bank, which have seen three days of violent protests against Trump's decision.

"We have taken a political decision not meant to reflect (what is going on in) the streets. Political work is responsible work," said Arab League chief Ahmed Aboul Gheit.

"Jerusalem has been occupied for 50 years. This is an extended battle, a battle that will be escalated," he told the news conference.

The resolution said the ministers would meet again within a month and held out the possibility that an emergency Arab summit would be held in Jordan to discuss Jerusalem.

Trump's December 6 announcement on Jerusalem, and his intention to move the US Embassy there, triggered denunciations from around the world, with even close allies suggesting he had needlessly stirred more conflict in an already volatile region.

Jerusalem's status lies at the core of the Israeli-Palestinian conflict, and Trump's move was widely perceived as siding with Israel.

Even small crises over Jerusalem's status and that of the holy sites in its ancient Old City have sparked deadly bloodshed in the past.

Arab diplomats said some Arab League members had wanted a more hard-line resolution, including punitive measures against countries that follow the U.S. example and recognize Jerusalem as Israel's capital.

That was considered too radical by moderate Arab nations and eventually dropped, according to the diplomats who spoke on condition of anonymity because they were not authorized to brief the media.

But Al-Maliki, the Palestinian Foreign Minister, sought to play down differences, saying the meeting produced "complete" unity among Arab nations.

"There were differences in assessment when we moved to specifying measures," he said. "But in the end we agreed on gradually escalating measures."

Both Aboul-Gheit and Al-Maliki said Arab nations remained committed to a 2002 Arab peace plan that provides for recognition of Israel in exchange for lands occupied by Israel in the 1967 Middle East war.

"That plan is a key reference in the Middle East peace process," Al-Maliki told the news conference.

Trump's decision, according to the Arab resolution, was "illegal" and a "dangerous violation" of international law.

"It's a dangerous development that places the United States at a position of bias in favour of the occupation and the violation of international law and resolutions."

Israel occupied and later annexed the eastern part of Jerusalem in the 1967 Middle East war, declaring the holy city its eternal capital. Palestinians want that part to be the capital of their future state.

Trump's decision, said the resolution, also stripped the US of its role as a "sponsor and broker" in the Mideast peace process, and "undermines efforts to bring about peace, deepens tension and will spark anger that will threaten to push the region to the edge of the abyss of violence, chaos and bloodshed."

The resolution adopted by the ministers reiterated that only the creation of an independent Palestinian state with east Jerusalem as its capital would end the Arab-Israeli conflict. It also mandated the Arab League to launch an "international media campaign" explaining the "gravity" of the American decision.