Beyond Amsterdam and tulips, take a walk through the Netherlands and its Gothic ethos, quaint canals and wintry wows. 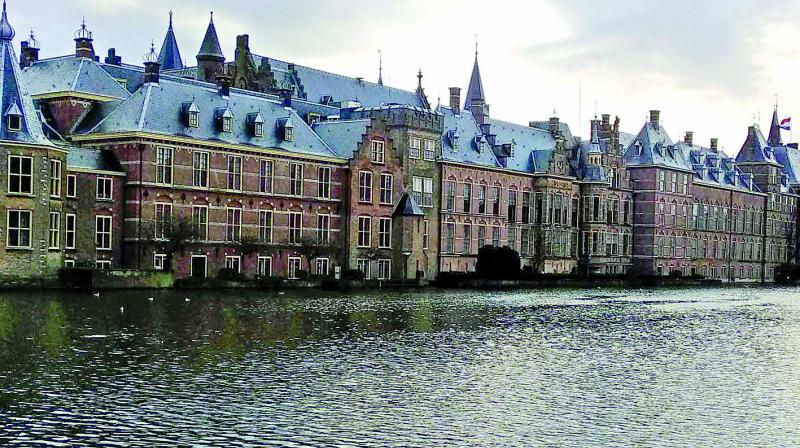 The view of the Den Haag

Contrary to hitting a touristy place in spring or summer, for those enamoured by fairy tales of Gothic castles, garden hideouts for goblins, princesses waiting patiently to be rescued atop tall towers and witches hiding in dense forests of white birch or oak, a trip to Netherlands in the winters is enchantment in reality. Even for those not into fairytales, but equally upbeat about a walk through the woods admiring abundant toadstools or taking in the warmth of a bonfire, the winters in Holland are replete with rich experiences.

Walking through such beauty, The Netherlands endeared itself to us. Snow is an intrinsic part of Dutch winters, and no matter how much chaos it causes on the streets, it is definitely a sight to behold. The Dutch see winters as intrinsic to their life.

The best of sights were at the very beginning! Landgoed Duin and Kruidberg is a classic country house with the most beautiful views opening to an English estate garden which embraces age-old trees, lush ponds and magnificent lakes of the Zuid-Kennemerland National Park. And, you’d be lucky to get a garden or lake-facing room for its spectacular views. Dressed in rich fabric, wall decorations and authentic furniture, this is a place to unwind. A walk through that age-old estate on a cold windy morning is an experience of a lifetime. Be wary of the strong wind chill though, or you might be whisked away to a goblin hideout!

A walk in Holland
People of all ages riding cycles in wind, rain or biting cold astounds one. It’s a delight to see young children riding past with their colourful bikes and windcheaters. The Netherlands is the bicycle capital of the world and has the highest bicycle density. Many natives believe that the Dutch are born on two wheels. It’s delightful to see people resisting technology, cars and scooters for old school bikes. Something we can learn from. 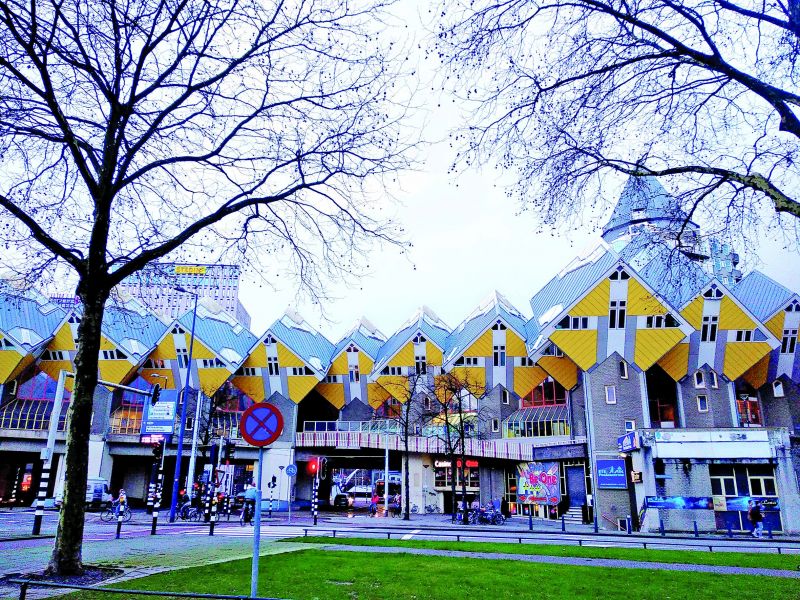 Zaanse Schans, a neighbourhood in Zaandam, near Amsterdam

True to its word, this wind-mill laden place of the wind-rich country greeted me with its intense moody winds and occasional drizzle. There are about eight to 10 windmills within walking distance to each other, a few in use even today. Over centuries, there are more than 1,000, (most in industrial mills), making Zaan district Europe’s largest industrial area. Finally, amidst chaos, we were finally led into an ancient windmill and its intricate functioning. Yes! Inside a windmill — an experience that attracts 1,30,000 visitors a year. Our next stop was Kooijman Souvenirs and Clogs, a wooden shoe workshop where clogs are made and Justin Kooijman took us through the entire process.  The art of making clogs is demonstrated — how an old ordinary block of wood transforms into a wooden clog, a way of life in these parts. These shoes are made from Poplar and Willow.

It was time for some cheese tasting too, along with wine at Henri Willig, a maker of Dutch cheese, most well-known for Baby Gouda. Goat, sheep and organic cheese made from recipes passed down through generations. There were red chilli peppers, herbs and garlic, red pesto, garlic and fenugreek too. In no country is the selection this varied. Not a surprise that The Netherlands is the world’s largest cheese exporter too. Their love for cheese is so deeply entrenched in their cuisine.

A Dutch holiday without a castle is not a holiday at all. Kasteel de Haar, the largest and the most luxurious castle in Holland, is located outside Utrecht, a half-hour drive from Amsterdam. De Haar takes one back to another era with its towers, turrets, moats, gates and suspension bridges. Enticed, we stood in awe as the sight brought fairy tales alive, and we went back to being eight-year-olds, amazed. The castle takes you back to the times of luxury and how the Van Zuylen family lived and treated their guests in the early 20th century. Luckily, the weather was also kind, and the sun shone brightly. The interiors of the castle lead you to a Roman Catholic Church. The impressive central or main hall witnessed wooden vaulted ceilings, richly decorated with golden leaves, half-Gothic cathedral and half-luxury hotel! Next to it was a romantic chapel and beautiful parks and gardens.

Boat Cruise: Experience the Vecht in a saloon boat

The Utrecht canals with their characteristic wharves are unique in the world. These canals are crowd-pullers as they take one through the historic buildings and bridges. The best way to enjoy these canals is from the comfort of the canal boats, marvelling at the extensive canal system. So, hop on and enjoy the beautiful surroundings as the Vecht meanders gently. In an hour-long cruise on the Vecht, a Rhine branchlet, we were in the company of peace and romance. 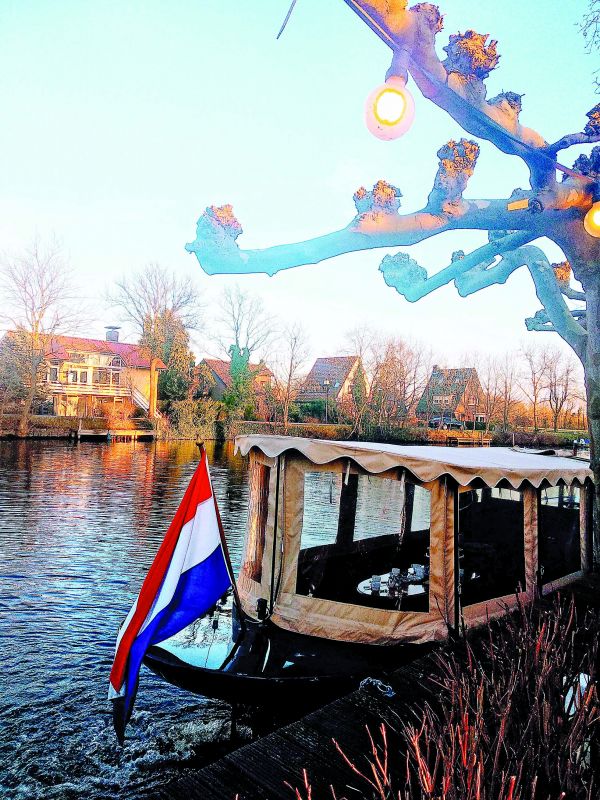 A cruise on the Vecht

Den Haag or The Hague

This third-largest city, the seat of the government stands elegant and imperial, better than its touristy and bustling cousin Amsterdam. The millieu sit busy in conversation at cafes, and a loud honk, breaks your reverie as you are greeted with the much used tram. Mauritshuis, home to the best of Dutch art from the Golden Age, the stately museum houses masterpieces such as Vermeer’s Girl with a Pearl Earring, The Anatomy Lesson by Dr Nicolaes Tulp by Rembrandt, The Goldfinch by Fabritius and The Bull by Potter are on permanent display in the intimate rooms of this  17th century monument. A favourite of ours was Escher IN HET PALEIS or The Escher Museum at the Hague. Introduced to his work rather strangely, thanks an inclination to The Red Hot Chilli Peppers, and the song Otherside, we were introduced to cubism. After that, I watched Robert Wiene’s The Cabinet of Dr Caligari, influenced by German Expressionist art, elements of Cubism and work by graphic artist MC Escher are also in the video.

Rotterdam is different, and reflects the country’s vision of itself in the modern or post-modern era. Such is the beauty of the city with its enigmatic skylines, art, food and bar scenes. What’s most worthy is how Rotterdam stood up after being almost razed to the ground by WWII bombers. It enthuses the country’s spirit as they joined hands to rebuild again with a vision. What drew us was the street art, a dominant part of the culture. Vibrant, large images and lots of captions! It also houses graffiti by the first generation European graffiti artist Ces 53 who is now in his 50s, who was inspired by different religions and cultures. Markthal Rotterdam (a marketplace) gives you a peek into public art. Another intriguing sight was this collection of haphazardly joined cube houses. A perfect blend of what a new age city dipped in modernism and development should be like.