Technology   In Other news  03 Jul 2020  Eye in the sky tower: AI will monitor US-Mexico border, tip off patrol agents about 'infiltrators'
Technology, In Other news 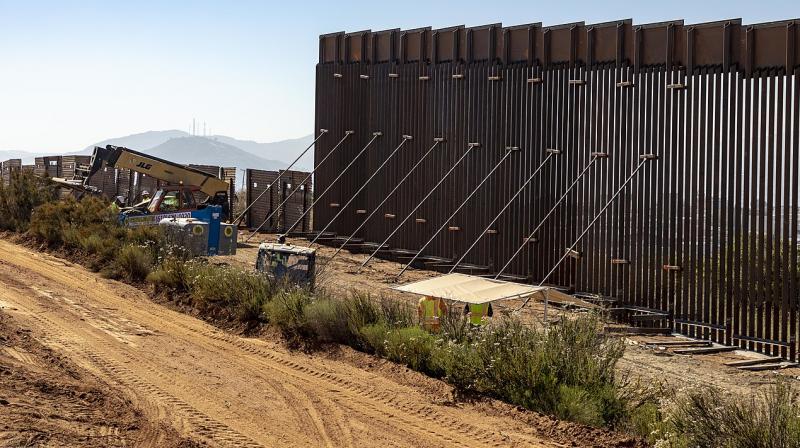 In this June 19, 2019 photo construction crews work on the replacement border wall on the boundary between the United States and Mexico near the Calexico Port of Entry. Customs and Border Protection (CBP), which built the steel wall, plans to install 200 autonomous surveillance towers by 2022, after a two-year pilot project using four. (Photo | Wikimedia Commons - Mani Albrecht of U.S. Customs and Border Protection Office of Public Affairs)

Washington: The US border control agency said Thursday it was expanding an unmanned monitoring system based on artificial intelligence on the US-Mexico frontier, granting a key contract to Silicon Valley startup Anduril Industries.

Customs and Border Protection (CBP) has been responsible for President Donald Trump’s controversial steel wall along the 2,000 mile (3,100 kilometre) boundary.

But with just over 200 miles of mostly replacement barrier put up so far, it is turning to high-tech monitoring to plug the gaps.

The solar-powered towers scan the border area for movement and then identify the source—whether vehicle, person or animal—using artificial intelligence-based software.

It alerts border patrol agents if it determines that action is needed.

“These towers give agents in the field a significant leg-up against the criminal networks that facilitate illegal cross-border activity,” Rodney Scott, chief of the CBP’s enforcement arm Border Patrol, said in a statement.

“The more our agents know about what they encounter in the field, the more safely and effectively they can respond.”

According to reports confirmed by the company, CBP awarded a five-year contract to Anduril Industries, a company started by Palmer Luckey, who created the Oculus virtual reality headset bought by Facebook in 2014.

Anduril, which is supported by Peter Thiel, the billionaire behind major defense and security contractor Palantir, told the Washington Post the deal is worth several hundred million dollars.

That is just a fraction of the more than $20 billion estimated cost for Trump’s border wall.

Democrats who opposed it have argued for a tech-based system to monitor the border, but the wall built in several key places has helped significantly reduce illegal border crossers, CBP statistics show.

Just under 75,000 people without legal immigration documents were stopped and apprehended between March and May, an 80 percent drop on the same period last year.

The main reason given was the US crackdown on asylum seekers from Central America that made it harder to obtain asylum, and US demands for Mexico to stop the influx from Guatemala, Honduras and El Salvador.