Having started their running careers together, ultramarathoners Sangeeta and Sunil Shetty have now broken the world record. 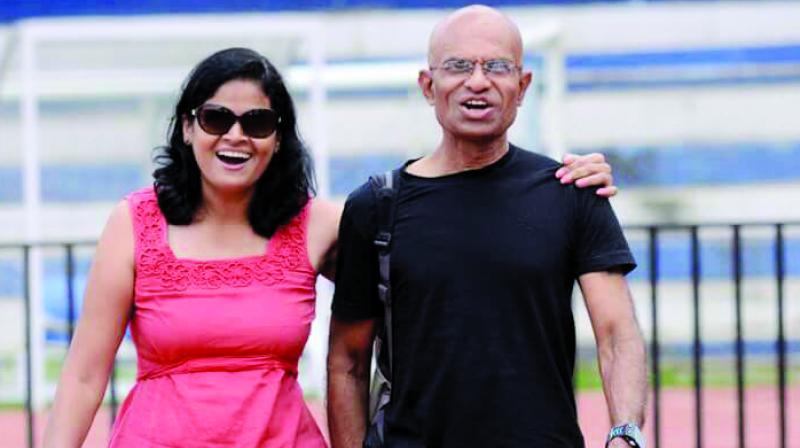 Sunil and Sangeeta have participated together in Bangalore Ultra-marathon, Mumbai Ultramarathon and Mumbai Stadium Run.

After getting married, a bride and the groom vow to do everything hand in hand. But it rarely ever happens that they cross career paths. Sangeeta and Sunil Shetty, renowned ultra-marathoners of Mumbai have been actively running for the past 15 years and now, they hold two records in the Guinness Book of World Records in their name for being the first married couple to take part in and complete a 48-hour ultramarathon together. The mammoth race was held at the Sree Kanteerawa Stadium in Bangalore, which concluded on Sunday.

In a race that saw the participation of 28 ultramarathoners who were on the trot, Sangeeta and Sunil were among the 20 who completed the race running 212kms and 266kms respectively, within the span of 48 hours.

Elated after setting a World Record, Sunil said, “We had been practising for this event for five months, running long distances every day. We have covered a distance of around 2,300 km just practising, which includes the local marathons that we take part in.”

“We have taken part in many events but this is the most that we have ever run. The conditions were a little different from what we expected. As the race started, it was raining heavily and all our accessories were drenched. In the day, it was extremely hot and the heat was scorching but being Mumbaikars, we were not troubled much. There is a lot of fatigue, we hardly ate anything and we are also short of sleep. But this is the joy of this sport,” added the ironman Sunil.

It all started for the couple in 2003, when Sunil felt that he was gaining weight and started running on the treadmill. He was soon joined by Sangeeta. Both of them kept running in small events and they did all of it together. “We ran our first marathon together and since then we have not really stopped,” Sunil says.

Sangeeta grabbed the number 2 spot in the ultra marathon in the women's division. Overwhelmed by the achievement, she said, “Running is more than just a hobby for both of us. We love running. Whenever we are travelling to meet our relatives or friends, we keep our running shoes with us. If we get a chance, we run. None of us have visited a doctor in 15 years and I think everyone should do it. Also, our daughter is a major support and keeps motivating us to take on bigger challenges.”

Sunil and Sangeeta have participated together in Bangalore Ultra-marathon, Mumbai Ultramarathon and Mumbai Stadium Run.

The duo has devoted their respective careers to fitness and sports as both of them work for a sports organisation named NEB Sports. The running community also calls Sunil, ‘The God’.

The pair is keyed up for the IDBI Federal Half Marathon, which will take place on August 20 in Mumbai. They are also a part of the organising committee and will be motivating and guiding the new runners of the city.