Sports   Football  19 Jun 2018  Football is a sport but it is not far away from politics
Sports, Football

Football is so popular in many parts of the world that some politicians don’t mind using it to further their interests. 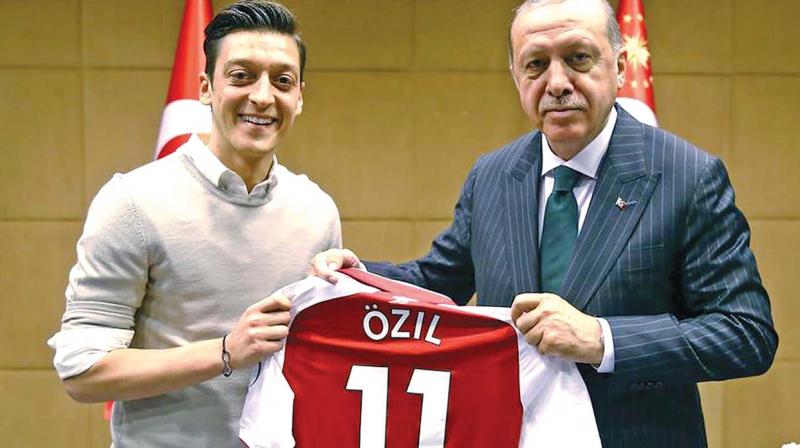 A file photo of Mesut Ozil with Turkish president Erdogan.

Chennai: Football is a simple game on the field and it is anything but simple beyond the confines of the touchlines and goal-lines. It’s not a surprise because no other sport has as much influence off the field. Football is so popular in many parts of the world that some politicians don’t mind using it to further their interests. The ongoing World Cup in Russia has had its fair share of politics.

First of all, the West has been in a virtual war with Russia for the last four years. Russia’s annexation of Ukrainian territory of Crimea in 2014, the country’s subsequent involvement in the Syrian war and its alleged role in poisoning a double agent in England have pitted it against a whole range of countries, headed by the U.S.A An FBI investigation has been probing Russia’s interference in the 2016 U.S. presidential election.

There is no doubt that Russian president Vladimir Putin has been using sports events such as the 2014 Sochi Winter Olympics and the 2018 Fifa World Cup to bolster his image. Russia suspects that the doping expose before the 2016 Rio Olympics that resulted in mass ban of its athletes is a Western conspiracy. The World Cup has steered clear of Russia vs the West so far and football fans would hope it stays that way until July 15.

Politics has, however, liberally mixed with football for some other countries. A photograph in which German midfielders Mesut Ozil and Ilkay Gundogan posed with Turkey president Recep Tayyip Erdogan last month affected the defending champions’ preparations no end. Ozil and Gundogan are Germans of Turkish origin and their photo with a controversial politician didn’t go down well with many people in Germany.

Even former players have lashed out at the duo while a sizeable section of fans expressed their disapproval through boos directed at them in a friendly match. Germany coach Joachim Low had got tired of answering questions over the photo. The problem hasn’t died down and it might grab the headlines again if Germany, which is home to the largest Turkish diaspora, go out early from the World Cup.

Egypt’s Mohamed Salah hasn’t yet made his World Cup debut but he has been a top draw in Russia. The Liverpool star raised many an eyebrow when he posed for a photo with Chechen strongman Ramzan Kadyrov in Grozny. A close Putin ally, Kadyrov rules Muslim-majority Chechnya with an iron hand.  Long-time observers of sports wouldn’t be surprised by the politician’s penchant to bask in the reflected glory. Egypt apparently chose Grozny as their training base as the Chechen capital doesn’t have discotheques.