Juventus beat Barcelona 3-0 in the first leg of their Champions League quarterfinal. 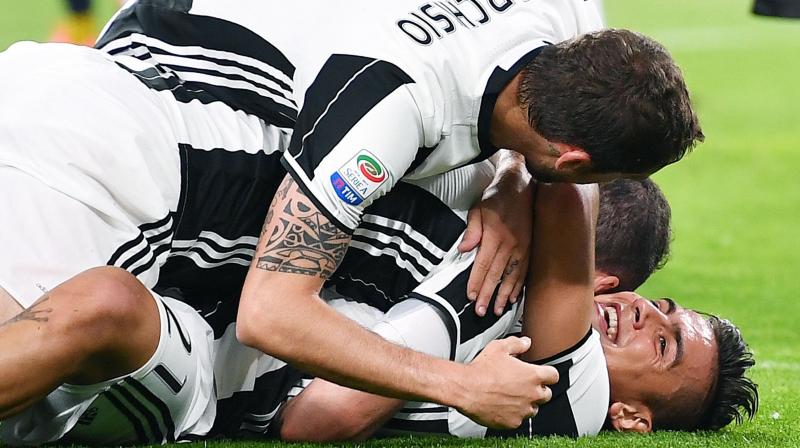 The result will give Juventus plenty of confidence heading into the second leg on April 19, but it will be wary of another fantastic comeback from Barcelona, which beat Paris Saint-Germain 6-1 in its last match to become the first team to overturn a 4-0 first-leg loss in the history of the competition.

The other first-leg match between Borussia Dortmund and Monaco was called off and rescheduled for Wednesday after three explosions went off near the German team's bus as it set off for the match, injuring defender Marc Bartra.

In Turin, Juventus was aggressive from the start and almost scored in the third minute when Gonzalo Higuain's header from a free kick taken by Miralem Pjanic was dropped by Marc-Andre ter Stegen, but the Barcelona goalkeeper recovered in time.

However, the hosts did take the lead four minutes later when Juan Cuadrado pulled a cross back from the right flank for Dybala to curl the ball into the bottom left corner.

Messi was largely kept quiet all night, but he provided a superb ball over the top for Andres Iniesta, whose effort was turned around the right post by Juventus goalkeeper Gianluigi Buffon.

That save proved pivotal as Juventus doubled its lead moments later when Mario Mandzukic's cross was deflected to Dybala, who drove a first-time shot into the left of the goal in the 22nd minute.

Barcelona thought it had pulled a goal back on the half hour, but Messi's strike was ruled out as Luis Suarez had strayed offside.

Juventus had several chances to extend its lead and finally did so in the 55th minute when Giorgio Chiellini headed in a corner off the inside of the left post.

Suarez almost got a crucial away goal for Barcelona in the 67th but his effort hit the outside of the left post.